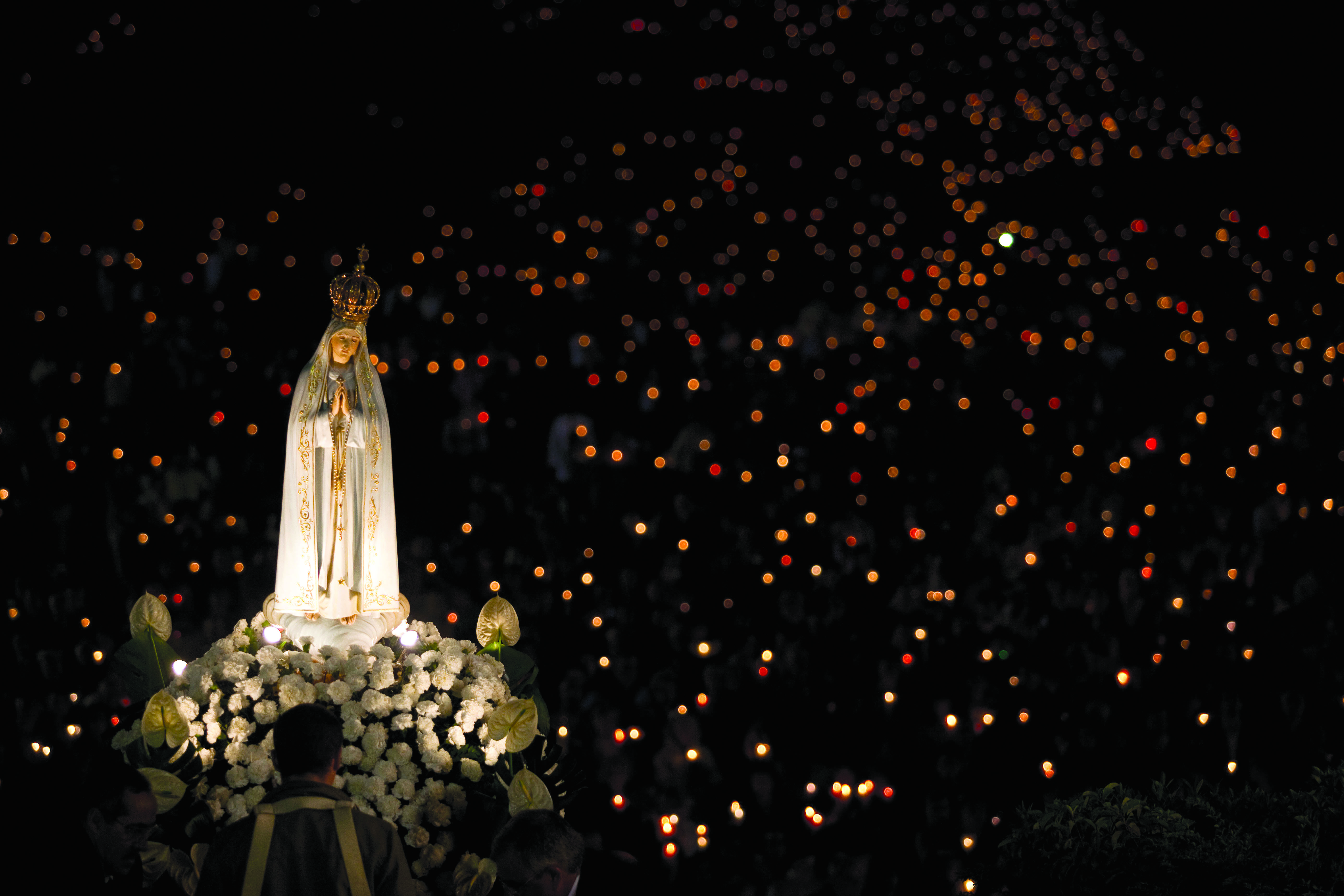 Guest blogger, Jeff Johnson, reflections on the 100th anniversary of the Fatima apparitions.

Across this past spring, for reasons I don’t fully understand, I’ve had the opportunity to offer presentations around the St. Cloud Diocese on Fatima. I speak at each parish not as a theologian or mystic, but as a story teller, one who somehow makes a living with imaginative literature. As I begin to tap this out, I realize the act of writing about the messages, promises, prophecies, and warnings of Our Lady of Fatima stirs the same thing one can experience when speaking of Her, which is to feel inadequate and overwhelmed. We would all agree: the story of the Mother of God entering into human history with promises, prophecies, requests, and warnings for everyone on earth is infinite, like a medieval tapestry whose edges enclose the universe. On this cool spring evening, three days before the 100th anniversary of the first apparition which astonished Lucia, Jacenta, and Francisco May 13th, 1917, I am thinking of the faces I have seen since this year began, and those of my beloved fellow parishioners in St. Anna, Holdingford, and Bowlus, faces that are waiting, faces with hopes and fears and questions about what might or might not happen across this crucial and prophetic year. What happened in 1917 in the presence of tens of thousands of people was the most astonishing supernatural event since the Resurrection, and it is reasonable for the Catholic mind to run towards great expectations.

A statue of Mary is carried through the crowd in 2013 at the Marian shrine of Fatima in central Portugal. (CNS photo/Paulo Cunha, EPA) See FATIMA-APPARITIONS April 18, 2017.

And yet, as long as I have waited for this year, and dreamed alternately of wonderful and horrible imaginings, I am surprised to be dialing back my guesses. God exists outside of space and time, and hardly needs a calendar, but He loves us, and surely appreciates our need to observe dates and anniversaries of weddings and birthdays and other things worthy of commemoration. I am an English major made nervous by numbers, and I haven’t the faintest idea what it could possibly mean that this October marks the centenary anniversary of Fatima, the 300th anniversary of modern Freemasonry and their grand lodge in England, and the 500th anniversary of the Reformation stirred by Martin Luther. We also have the stark truth that our planet of misfortune is growing darker and more horrific by the day, and the many forms of evil from abortion to war seem to have a momentum that is getting well ahead of us. To offer words of fair encouragement against it all, however deep the darkness around us seems, we must remember Our Lady of Fatima promised in the end that her Immaculate Heart would triumph, and She keeps Her promises!

After years of obsessively studying thousands of messages from all over the world—Church approved and otherwise—I have concluded everything Catholics need to know radiates from Fatima. Our Lady came not to bring us trouble, but to defend us from it, and she gave us precisely what we need to be safely led to Her Son. Remember: at the end of last apparition on October 13th, when little Lucia said, And is that all you have to ask, Our Lady of Fatima said, There is nothing more. It was at this point that the children were shown a quick succession of visions including Joseph, Jesus, and a manifestation of Mary as Our Lady of Mt. Carmel, which likely prefigured Lucia joining the Carmelites as a nun, and 70-100,000 people beheld the Miracle of the Sun.

Our Lady of Fatima might also have been saying: You have everything you need now for salvation. After all, in the preceding months She stressed the importance of Mass, praying the Rosary for peace, the Five Saturday Devotion, and consecration to the Immaculate Heart of Mary, which is the surest, safest path to the Sacred Heart of Her Son, Jesus. We can, like Lucia did mid-summer, ask for a miracle so that people believe, but we should also be grateful for the messages of Fatima we got, which are dead simple, and the very things all Catholics should assent to cheerfully.

Jacinta and Francisco Marto are pictured with their cousin Lucia dos Santos (right) in a file photo taken around the time of the 1917 apparitions of Mary at Fatima, Portugal. Pope Francis has approved the recognition of a miracle attributed to the intercession of two of the shepherd children, thus paving the way for their canonization. (CNS file photo) See POPE-FATIMA-MIRACLE March 23, 2017.

If I could editorialize, I would like to offer an idea, however speculative, which is that while all Catholics on earth are sharing, and inhabiting 2017 together as brothers and sisters, it is not impossible individual experiences might be around the corner. The three children for instance, had different experiences of Our Lady of Fatima, and the Miracle of the Sun was hardly consistent for those there, or within 30 miles of the Cova: some saw nothing; some saw the sun as a burning wheel of fire; others saw it dash about, pulse, and veer terrifyingly towards earth. I have read too, that some got upset men were not taking off their hats in the presence of the miracle, and there was some yelling and hollering as a result!

Rather than raise my voice in closing, I offer some advice for anyone reading this little piece on the blog of the St. Cloud Visitor, which is to at least consider making a brief list of ways one might honor Our Lady of Fatima this year, and then following through on it. I can only speak of my plans, as they are already enacted: I intend to speak about Fatima to anyone who will listen; I will continue to consecrate and re-consecrate myself to Mary while using the wonderful book 33 Days to Morning Glory by Father Michael Gaitley; I will read everything I can by St. Maximillian Kolbe on the Immaculate Conception, which is the devotion of my church in St. Anna.

And last but not least, I have started in on making a series of stone walls around my grandma Anne’s statue of Mary, which overlooks our little lake in western Collegeville. It was given to her the year I was born in 1959 by my uncle Don, and I have clear memories of driving Tonka trucks around it when I was a little boy. I hope I am forgiven that, along with many other things, and may God Bless you St. Cloud Diocese.

Jeff Johnson teaches English at Central Lakes College, and directs Verse Like Water, the visiting poet program of Central Lakes College. He lives in Collegeville with his wife Jessie and university age sons, and is a member of the Two Rivers Catholic Community of Bowlus, Holdingford, and St. Anna.