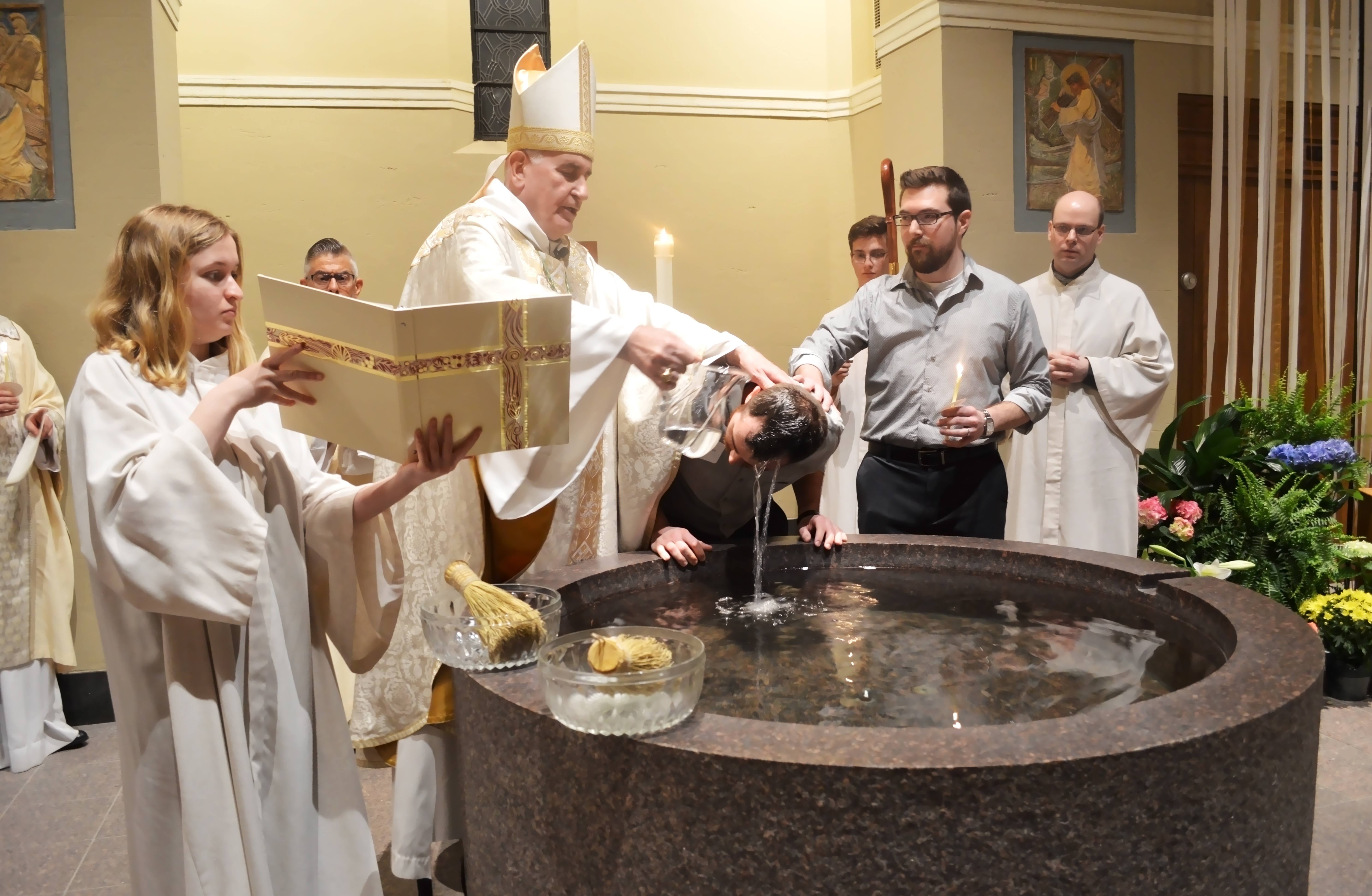 Guest blogger Travis Hartnell talks about his journey to full communion with the Catholic Church at this year’s Easter Vigil.

Travis, center, with Ryan, his sponsor and his girlfriend Nicole.

Many people have asked me the question, What brought you to the Catholic Church? I heard this question numerous times throughout my journey and every time it meant something different. I wasn’t sure how to respond at first since I hadn’t warmed up to sharing my story. I always felt it was obvious God brought me here, but I knew there was more I could offer people. I was blessed with many graces, and given the hardest conflicts of my entire life during this time. I went through the scariest rollercoaster ride of my life and wasn’t sure when I would get off. So today I want to give you the meat and potatoes of that journey.

The spark that ignited this journey happened at the turn of 2016. Now to start you there wouldn’t be just. I had influences throughout my life that helped me become a spiritual person. I was raised by a spiritual father who was born and baptized Catholic, but didn’t practice much of his life. My mother has been a caring, liberal woman who didn’t present us with specific spiritual offerings but the belief that God is real. Both of my parents didn’t attend church or tell us we were required to growing up. They took an approach that allowed life to be open to ourselves as we grew older. This let us have the freedom to explore what made us happy growing up without feeling judged or different for our choices.

My whole life I have believed in God, a higher power that put us here with a destiny. Countless times in my life I have been shown things happen for a reason. To believe in this means there is someone else [God], that puts us where we are in life against our own will. I say this because it is what truly brought me to Catholicism, and brought me to the happiest point of my life. I have learned people come and go in our lives. Some stay longer than we want, others leave too soon. Best of all, those we are really meant to be with, stay forever.

My coming-to-faith moment started at the end of 2015 with the turn of the New Year. I had been unhappy with my life for quite some time. This unhappiness came from a relationship I did not have a desire to be a part of, and a less than ideal living situation. I had been living with a girl I was dating at the time for a few years. I was comfortable where I was, but not happy. I knew I needed a change, and I wanted that more than anything. To initiate this change I needed to find a new place to live that I could afford on my own. I found an apartment right away to move to and was given hope. Little did I know, I would lose this apartment to someone that means the world to me to this day. This disappointment from the apartment loss left me feeling hopeless. I fell deeper into a depressed state than I already had been in. I felt I had nowhere to turn to. I remember being on my knees alone crying in my room. I was trying to find out what I was supposed to do. I found myself asking God, being mad at him. I really only turned to God in moments of need, not gratitude. I remember feeling as though he did not care about me and what happened. Friends, family and God had left me alone.

Travis receiving the Sacrament of Confirmation with Bishop Donald Kettler during the Easter Vigil April 15 at St. Mary’s Cathedral in St. Cloud.

The difficult task life had thrown at me was moving into a new home. I needed to find a place within my budget, and in a reasonable location. About a month later I had an opportunity to move again, but for some reason I decided to pass. Another month went by, and again an opportunity came, but I passed. I made the choice to actively pass on these apartments because it felt like the right thing to do, and I could not have been happier with the choice I made. If I had taken the instant relief from them, I would have missed out on the biggest life-changing events that happened in my life.

It was shortly after these happenings that I approached Ryan, my sponsor, about church. I wanted to know more about God. I was starting to feel a deeper connection with him from the hopelessness I had been going through. I was unsure as to what this all meant to me. I asked to attend Mass one Sunday morning and was afraid. I was so afraid since I did not know what to expect. I remember wanting to back out that morning, but I gathered the courage and went. I attended morning Mass at St. Mary’s Cathedral. You could say I jumped in head first. I was overwhelmed by the beauty of the church, the love of the community, as well as the passion of the priests and others serving the church. It was Father Scott Pogatchnik that first touched me with the words of the Gospel. I remember leaving church feeling refreshed. Like I just hit the restart button on the spiritual darkness I let cloud me. I loved the feelings that overcame me. I soon had asked Ryan to attend Mass a few more times. I knew I wanted to be a part of this community! I just did not know how I was going to get there.

Shortly after this first experience with church, I met someone that would provide a major impact on my life. I knew of this girl, but only as Ryan’s sister-in-law. She was the one that took my apartment in the beginning of this story. Little did I know, without her, I couldn’t credit where I am in my journey today. I met Nicole a year ago. She and I were invited to Ryan and Kaela’s house for a bonfire. Immediately I knew there was something special between me and this girl. They say when you meet the person in life meant for you, that you’ll know when you know. Let’s just say I knew! We became friends, she learned of my new journey in faith and has been a practicing Catholic herself since birth. Because of this she invited me to Mass every Sunday with her. I grew to love Mass, and her. This is where my life had changed me, I felt God’s love. I felt the love from this girl. I knew that if I had gotten that apartment she took, I would never have met her at that fire. She provided me the little bit of comfort I needed to commit to Catholicism. She has changed my world with the support and love she has provided me. I am happy to call her mine!

Summer was coming to an end and I had been attending Mass for months, always watching others take Eucharist and feeling left out. I made the decision that had been aching at my heart for so long. I needed to pursue the path to becoming Catholic. I went to Ryan and asked if he could look into what I needed to do to join the community. He got a hold of faith formation and put me on the path I needed to start. I was nervous and excited at the same time. Joining the RCIA program was amazing. They provided the tools I needed to learn and become a member of the church. I attended class weekly, as well as Mass every Sunday. I met priests, deacons, and even the bishop a few times. I was asked to be involved in some of the Masses at my comfort. I was called in front of the church many times as a catechumen. The unbelievable thing was, I was never nervous. Easter Vigil came, and I was presented in front of the entire church for baptism first communion, and confirmation! Again, with the welcome of the community, I was never nervous. I am sure you could say it was the grace of God, but maybe it was because, it was the one place, I was truly meant to be.

Thank you Travis for sharing this beautiful and inspiring story. I love how you’re parents allowed you to be free, without guilt or judgement. It is wonderful to follow your journey and how Ryan was there for you. I am so very happy for you and Nicole. Love you both very much. Blessings & Hugs

Awesome post, Travis! Thank you for sharing- hopefully your story can inspire others on their own journey!

Congratulations Travis! What an amazing journey you have been on to find your faith and your life! Thanks for sharing your story. You are a wonderful writer too. Blessings to you in the future!