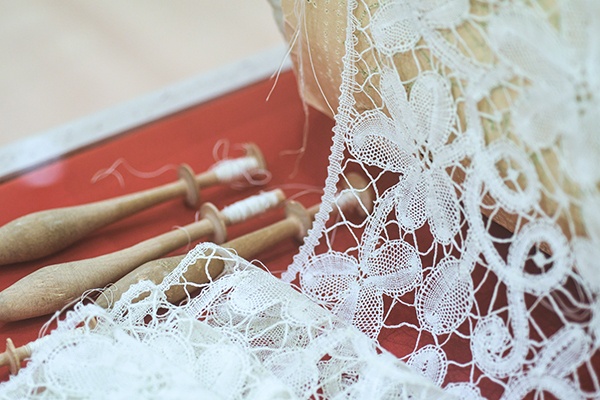 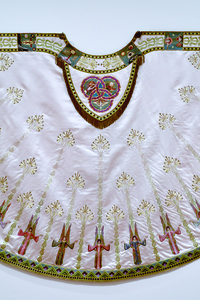 On May 3 of this year I spent almost an hour touring the vestment-making exhibit at the Haehn Museum. It was like savoring a refreshing drink, like sipping a fine red wine as rich as the beautiful works of art displayed there. It did my spiritual heart a lot of good.

It dawned on me that the talented and dedicated artists who designed and sewed these vestments and items for liturgical use were not merely “making pretty things.” They were zealous contributors to the pre-Vatican II liturgical movement in our country, as they took full opportunity to enhance the significance that vesture offers to liturgical services. I could feel the energy that they put into their creations as I surveyed their tools and admired their handiwork. These Benedictine women knew the importance of prayer and work in the monastic life, but they dedicated their work to deepening the liturgical prayer of parishes and religious communities through the sacred sign of vesture. They were generous servants in the work of renewing the worship offered by God’s holy people, and I am very grateful to them. 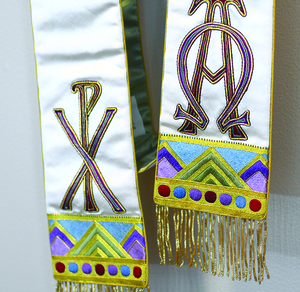 On December 9, 1925, the Congregation of Rites rejected the so-called Gothic Mass vestments that were becoming popular in some places and declared that manufacturers of such vestments were departing from the practice of the Roman Church. Gothic vestments were more ample and flowing than the “fiddle-back” chasubles that had been normative since the Baroque era. But the more worthy Gothic vestments continued to be worn in some countries, and the Sisters at St. Benedict’s Monastery continued to make them, as evidenced in the chasuble from the exquisite “Angel Set” on display in the exhibit. In this way they were looking to the future rather than the past and letting a sense of style evolve. 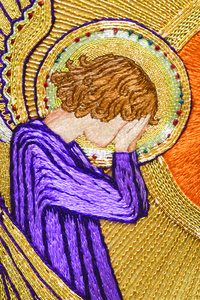 Sometimes I wonder what connection there can be between the liturgy and efforts to protect the natural environment. Thus I rejoice that the exquisite flowers, plants and animals portrayed on these vestments brought the world of nature right into the sanctuary, right into the heart of the sacred liturgy. I like to think that perhaps this insight was shared by the Mass celebrants who wore these vestments. I know that there are many men who grow and appreciate flowers (I’m one of them), but perhaps flowers have been not considered to be “manly.” These elegant vestments that were to be worn by men proclaim loud and clear that flowers — God’s best poetry — are for all women and men to enjoy.

It is true that post-Vatican II changes in the liturgy changed liturgical taste and reduced the desire for the kind of vestments displayed in this exhibit, as color, design and enveloping form replaced the symbols that are so prominent on the vestments made by the Sisters. But the “quality” and “appropriateness” that were promoted forty years ago in Environment and Art in Catholic Worship (nos. 19 -23) and in Built of Living Stones (2000), and that we have come to expect in ritual costume for contemporary liturgy were at the heart of the Art Needlework Department of St. Benedict’s Monastery for 101 years. For that I say: “Amen! Alleluia!”

Note: This year, the exhibit at the Haehn Museum will be open through Dec. 22. Regular hours are Tuesday-Friday noon to 4 p.m., Saturday 10 a.m. to 3:30 p.m. and closed Sunday and Monday. 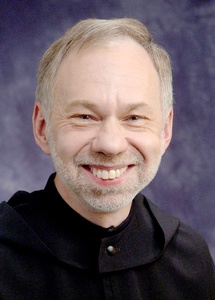 Previous Post A DAY IN THE LIFE: Youth ministry coordinator Kelli Kleinschnitz Next Post Where everybody knows your name