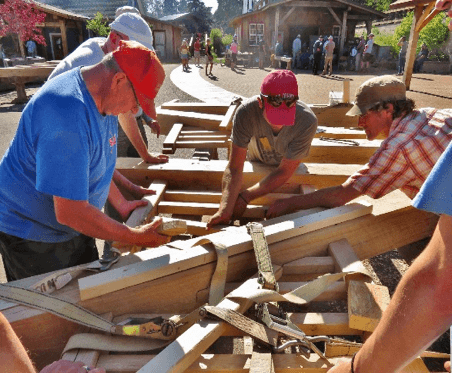 Eight monks and fifteen volunteers converged on the North House Folk School in Grand Marais last month to build a timber-frame footbridge for the trail to the Stella Maris Chapel.

We worked 9 to 5, five days a week, for two weeks, side by side and shoulder to shoulder, surrounded by whirring circular saws, scraping hand planers, gouging drill bits, roaring routers and one thundering chain mortiser. Daily at 7 am, monks and a number of the volunteers gathered for Morning Prayer and Mass at a cozy cabin two blocks up the hill from the waterfront workshop.

After work, we relaxed and chatted for an hour or so before dinner. The time to

gether was both focused and improvisatory, productive and measured; good for solitary work amidst the noisy tools or getting to know each other better during the quiet moments, the two weeks provided some of the best aspects of any spiritual retreat.

Designed by Peter Hendricksen and funded by donors the Schwietz and John and Bonita Benschoter, the bridge will stand in the long tradition of timber-framing at Saint John’s, dating back to the construction of the ceiling of the Great Hall in the 1880s. White Oak and White Pine timbers were milled from fallen trees in the Saint John’s Arboretum. The Abbey Chapter voted two years ago to approve the project, believing it exemplifies the Benedictine practices of sustainable care for creation, manual work and community life. Indeed, some of the monks and volunteers had never met before the build, while others deepened years-long friendships. Our time together developed a newer understanding of our respective commitments, whether as lay families, single people, or monastic brothers.

The work was both physically demanding and mentally taxing, as we performed repetitive tasks with large and heavy pieces of lumber and sharp tools requiring a particular level of skill. We learned from each other and our professional instructors Peter Hendrickson and Tom Healy stepping up to support when needed and finding out where our individual strengths lie. Fitting the pieces together was both a literal and figurative task: in total, 100’s segments of wood needed to be measured, cut, trimmed, and fitted into place; likewise, the project gave participants the opportunity to consider our avocation for craftsmanship within the wider context of our life-long vocation, whether as professed religious or faithful layperson. Together we watched the days unfold, and saw with them a clearer picture of who God has called us to be and what that calling asks of us, moment to moment. Whether the moment demanded a strong back or a listening ear, we were able to find grace in the gift of our time together.

In a real sense, this structure will be both a shelter and a passageway on a well-traveled pilgrimage. Railings and benches will define the pathway and offer a place of rest, while the rafters and trusses will both lift up and cover. We anticipate with joy how the bridge will welcome the thousands of people who yearly make their way out to Stella Maris Chapel. At the same time, we look back on those two weeks with gratitude, knowing that our collaboration has both lifted us up and given us the respite of perspective. With this opportunity to spend so much time together, at such a distance from our daily rounds, we return to our communities and commitments with renewed vision of how our lives intertwine.

As Christians seeking God in manual labor, community life, prayer and service to the world, we rely on the presence of Christ in one another, in guests, and in strangers. Whether we drove up to the North Shore in pairs or singly or as a group, we found ourselves bound together into a cohesive whole. Whether we stayed the full two weeks or were only able to stop by for a day or two, we each found in ourselves or each other new facets, linkages we hadn’t known existed, or wider hopes for the future. Few of us emerged without nicks or cuts, bruises or abrasions (and none of us left without fatigue), but we realized in these passing struggles the inspiration to unite our pains with the larger project, and, in so doing, be lifted up yet again.

We still have lots of work to do! The pieces are all cut and many of them are fitted, but as you can see the pieces remain mostly scattered. They are currently being finished with a wood sealant and will be ready to be fitted in a couple weeks. By early-September we expect to be able to assemble the entire bridge in place, on the shores of Lake Sagatagan near the Preparatory School and the statue to St. Kateri Tekakwitha. In the meantime, we rest, return to our regular jobs or turn to new ones, motivated anew by our shared bonds of community and work in Christ.

Previous Post WYD, Part II: Our Lady of Czestochowa and Auschwitz Next Post Prayer, Inspiration and Works (of Art)