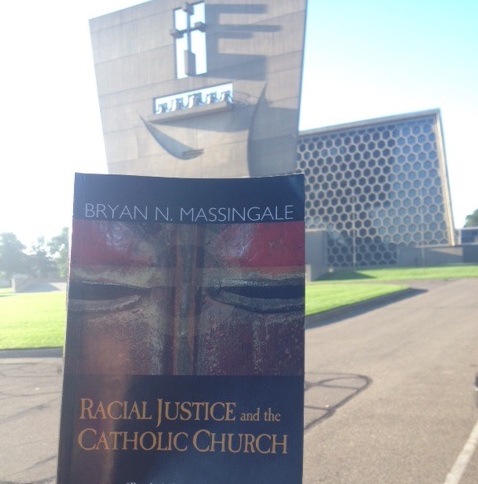 One man raised both arms in the air, palms out, elbows locked, hands up.

And he prayed, “For thine is the kingdom, and the power, and the glory, forever and ever. Amen.”

Another man raised both arms in the air, palms out, elbows locked, hands up.

And he was shot three times in the leg.

The difference between these men? One wears black. The other is black.

Mass struck me differently one day in mid-July, after reading the Washington Post headline, “North Miami police shoot black man who said his hands were raised while he tried to help an autistic patient.” As I watched the presider raise his hands during the Our Father, I imagined Charles Kinsey making the same motion with much different results. The shooting of Kinsey was one of too many instances of racially-charged violence that plagued the country this summer. How long, O Lord, will the hate continue? How many more lives will be destroyed?

Racism is so deeply woven into the fabric of this nation. What can I possibly do about it?

These are the sorts of big questions that prompted a racial justice book club to form at the Saint John’s School of Theology and Seminary. A small group of us met for dinner each Wednesday in August to discuss Fr. Bryan Massingale’s prophetic book, Racial Justice and the Catholic Church (Orbis Books, 2010). Some SOT students attended a lecture by Fr. Massingale at St. Cloud State earlier this spring. We were inspired by the urgency with which one of the country’s leading theologians attacks racial injustice. We cannot remain indifferent, Fr. Massingale says. Peoples’ lives are being destroyed by discrimination. We must act.

After two years of graduate studies, one of the most important lessons I’ve learned is that effective ministry is fueled by both passion and knowledge. We used our weekly discussions to talk through big theological concepts like human dignity and social justice. Guided by Fr. Massingale’s research, we did our own mini analysis of race relations in our parishes. But mostly, we sat around the table sharing stories. What was it like marching in the Black Lives Matter protest? Did your family talk about race growing up? How do you feel when you hear of another shooting in North Minneapolis, Milwaukee, Dallas, and on and on. Lived experience provides the spark.

Two SOT classmates and I did our undergraduate studies at Marquette University and were lucky enough to be taught by Fr. Massingale. I’ve shared my struggles with moving from Milwaukee, an urban, racially-diverse city, to Collegeville, a rural, mostly white town. There were many nights this summer where I watched from my window as campers caught Pokémon and monks strolled after Evening Prayer. I confided in the group that I feel grateful for the peace I experience here. At the same time, I feel unsettled and a bit removed. There are no blood stains outside Emmaus Hall, no protestors on Abbey Road. But there are ministers here who long for racial reconciliation and desire to be part of the solution.

The Lord requires of us to “do justice” according to the prophet Micah (6:8). This summer, our justice work was aided by good classmates, a good book and halfway decent leftover pizza.

Jessie Bazan is a master’s of divinity candidate at the Saint John’s University School of Theology and Seminary. She serves as the director of retreats and social outreach for St. John’s Campus Ministry.

In my mind, Central Minnesota reeks of racism! There are no people of color in the town in which I live, or the church to which I belong! Why? Because they are not welcome! The people here, want to keep this an all white community. It’s OK for people of color to come and work the farms, but they better not stay. It’s an unwritten rule, and not talked about either!!
I came from St. Paul, then Anoka. While in Anoka, we(our church) adopted a vietnamese family. We were not the only church to do this at the time, either.
Today, there is a large population of vietnamese and east asians in Anoka. Why can’t we do this here in Little Falls? Many small towns near us have done so and it has worked out beautifully. I have heard people say it’s because we have no industry for hiring here. I think that is just an excuse!! Am I all wrong?