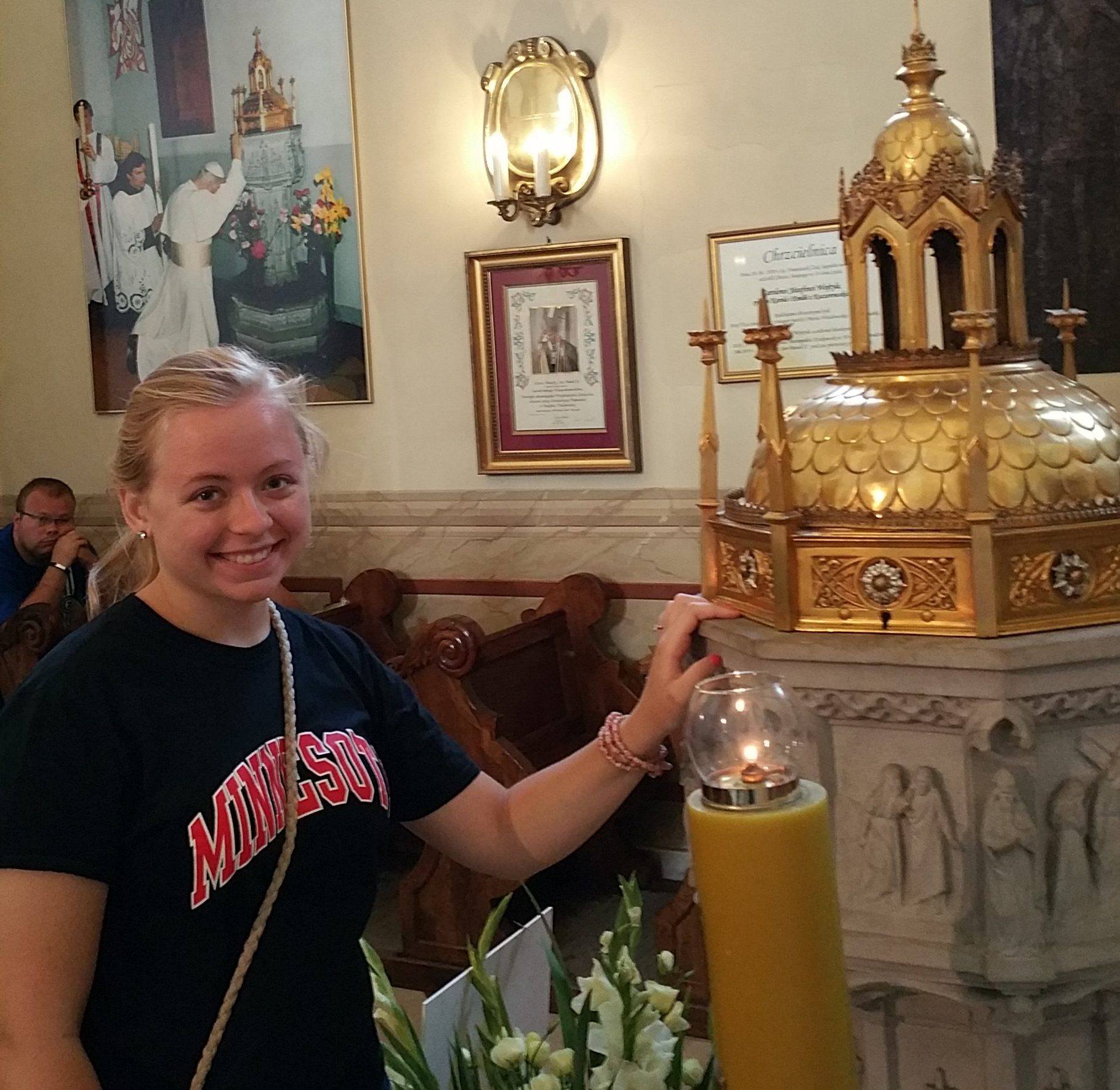 Home. There’s something so great about hometowns—so many memories, milestones, and family ties forged there. I’m so blessed to have been able to return to my hometown after college; going back to where your roots are helps you to remember who you are and see how much you’ve changed and grown in your time away.

When we were in Poland, we had the incredible opportunity to visit Wadowice, the hometown of Karol “Lolek” Wojtyla, the future St. John Paul II! We visited his parish church where he was baptized and received his First Holy Communion, and when we went to the side chapel where the baptismal font is located I immediately noticed a picture on the wall behind the font.

It was St. John Paul II, as Pope, touching this baptismal font and praying before it on his knees. That image really struck me—here was St. John Paul II coming back to where it all started for him spiritually, the moment he became a child of God. I can only imagine what must have been going through his mind—So much had changed since he and his dad had moved to Kraków when he was 18. Was he flooded with memories of his mother and brother who both died by the time he was 12 years old? Did he think of all the times he would come to this church before school in the mornings and pray before the image of Our Lady of Good Help? Did he thank God for what He had done with him since then—not only giving him the gift of the priesthood, but making him bishop, archbishop, cardinal, and then Pope?

After we visited the church, we got to see his home which has been turned into a museum about his life. One of my favorite parts was this window where John Paul II would always look out, the view being the side of the church. There was a sundial was painted on there with the words “Time flees, Eternity dwells” (in Polish, of course!). This really struck all of us—little “Lolek” would have looked out this window almost every day and had those words imprinted into his heart and mind. It’s so easy to forget about eternity and focus solely on this life—but St. JPII reminded us over and over with his preaching, life, and example of suffering that eternity should always be our main focus as the only thing that will last.

The other incredible part of the museum was seeing the gun used by the would-be assassin in 1981 when St. John Paul II was shot in St. Peter’s square. The gun is placed under glass in the floor, which was a neat way of showing that the evil of that act wasn’t on the same level of the things on the walls. And it was what was on the wall in that room that hit me—a huge picture of St. John Paul II forgiving his would-be assassin, Mehmet Ali Ağca, in prison. JPII didn’t just talk about God’s mercy, which was a huge theme of his pontificate, but he lived it in the most powerful way possible, by forgiving the person who tried to kill him. That picture spoke more about what mercy truly is than a thousand homilies. He didn’t hold on to any grudge, but wholeheartedly forgave, even though Mehmet didn’t ask for that forgiveness and most likely didn’t want it. We often forgive the people we deem ‘worthy’ of being forgiven, who are truly sorry, and even those people we have trouble forgiving. But someone who’s not sorry, who would hurt us again if they could, are we capable of forgiving them? The two most powerful things we can say are ‘I’m sorry’ and ‘I forgive you.’ In this Year of Mercy, who has hurt you the most and needs your forgiveness? Can you lean on God’s grace to forgive them, even if they’re not sorry?

Previous Post We Remember, We Celebrate, We Believe Next Post Batches of bouja blend tradition, stir up memories