The Fifth Day of Christmas

By From the Heart | Joe Towalski | Taking the Lede 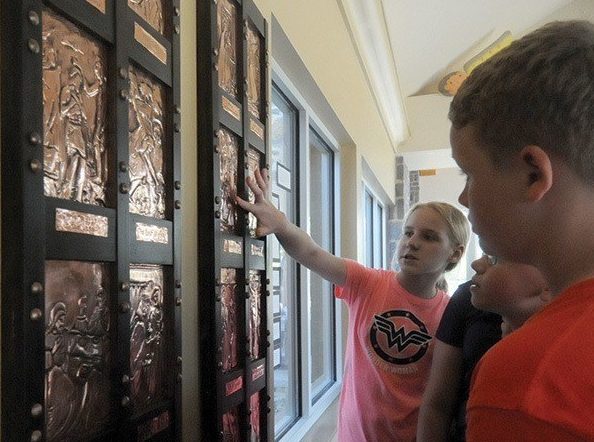 Since the fifth day of Christmas is associated with “five gold rings,” and with the end of 2016 fast approaching, I thought it would be worthwhile to look back at five “gold” stories from the past year — ones that, from my perspective, were truly moving and inspiring. Here is my list of the top five in no particular order. (Click on the headline to read the full story.)

This story from May featured two seamstresses — Sarah Zeroth and Lisa McCalla — who use old wedding dresses to make garments for families grieving the loss of an infant child. Families can use the gowns or wraps to hold their baby, and they can keep them as a memento or use them to dress their child when they are laid to rest.

“Every baby deserves something that’s beautiful,” Zeroth told The Visitor.

Their efforts are a much-needed ministry of mercy — one that honors the sacredness of life and comforts suffering families.

This feature told the story of five Linn brothers and their families in the Avon area who restored an old pickup truck belonging to the brothers’ late father. They did the work to honor their mother, Irene Linn, who suffers from an Alzheimer’s-like disease. On Mother’s Day, after nearly three years of work, son Eric took his mom for a ride in the refurbished truck.

“Tragedy and disease have taken so much from us,” Eric said at the time. “Who would have thought that after all the work our old farm truck did to support us it would be the glue that kept our family together?”

It’s a story that honors the dignity of life and the strength of family bonds.

These students at St. Mary Help of Christians School and their art teacher deserve praise for their high-quality replica of the Holy Door of Mercy that was open this past year at St. Peter’s Basilica in Rome.

The students used a technique called “copper tooling.” They were each assigned one or two images from the Holy Door, and each image was made into a panel, “depicting biblical scenes of sin and redemption through God’s mercy.”

“I just think this is a perfect representation of this whole community,” one teacher at the school said. “Starting in art class, incorporating religion, incorporating faith, our wonderful volunteers, it encompasses so much of the school and parish and it really represents us working together.”

It was an interactive and very creative way to participate in the Jubilee Year of Mercy.

This feature told the story of Father Arthur Vogel, a priest of the Diocese of St. Cloud who grew up in Germany when Hitler came to power. His incredible journey — which included spending time in a prisoner-of-war camp in the United States during World War II — eventually led him to the priesthood and central Minnesota, where the services of a German-speaking priest were in demand at the time.

Father Vogel’s story is a reminder of the power of the human spirit in the face of great adversity and the role of the Holy Spirit in guiding us on our life’s journey.

Every morning since the disappearance of Jacob Wetterling in 1989, Agnes Imdieke of Albany would light a candle and say a prayer for his safe return. I found her dedication to praying for this intention, even after so many years — years during which many of us, including myself, thought the mystery of Jacob’s disappearance may never be resolved — to be inspiring.

The ending of the story is bittersweet, of course. We now know that Jacob was murdered. But that doesn’t mean Agnes’ prayer was in vain. We don’t always get what we pray for, but prayer always brings us closer to God and it can bring us closer to others in need of comfort, strength and hope.

Agnes’ story is a lesson in faithfulness and prayerful perseverance.

Those are my five gold stories of the year. But I’d like to offer two more that are worth your time if you missed them earlier in the year: “Retired priest commissioned artwork to honor, comfort those involved with hospice” and “County program helps imprisoned make transition back into community.” The first is a story of gratitude; the other is a story of hope and redemption. Both say something important about the value of life and the sacred dignity of every human person.