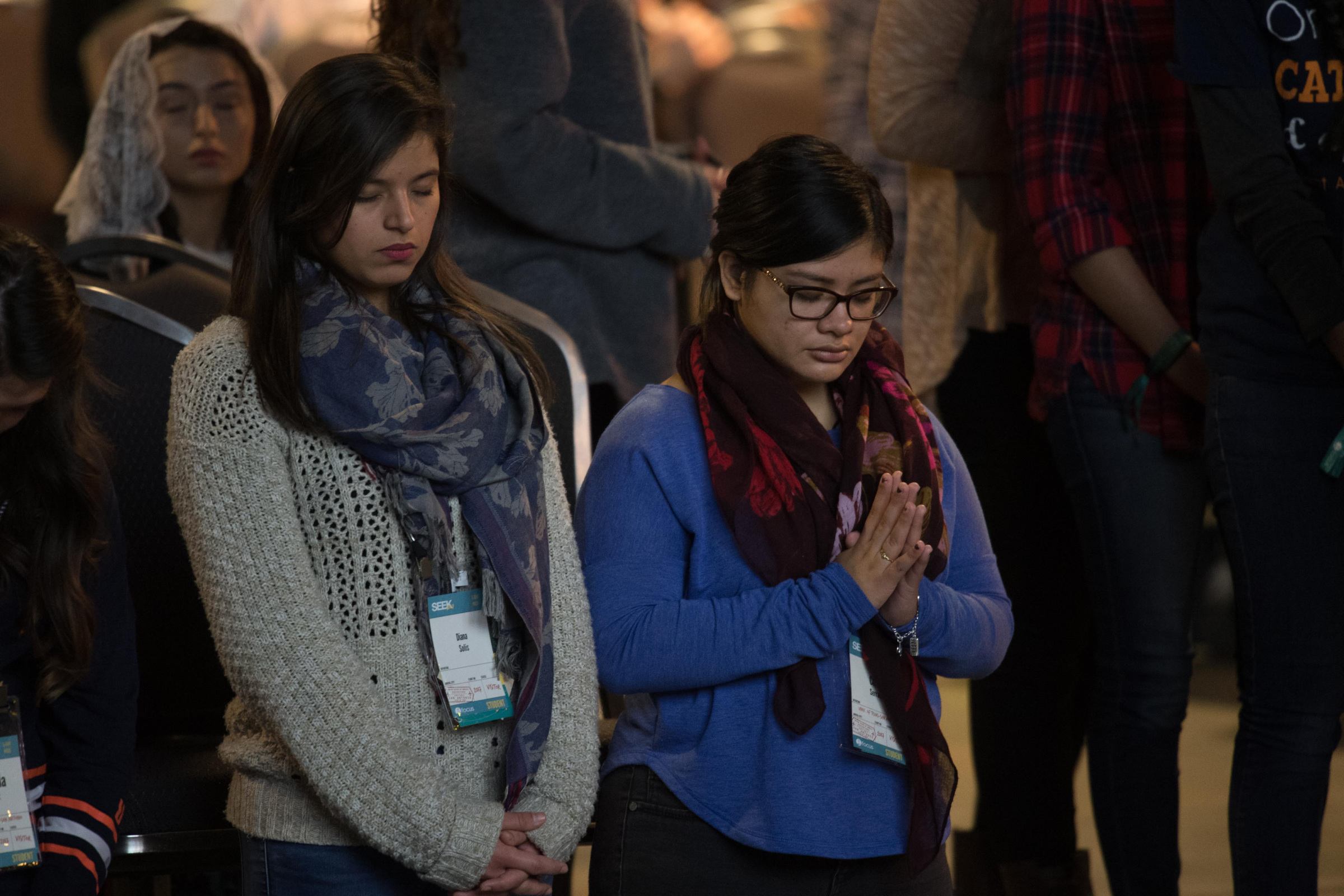 From January 2-8,  I was blessed to attend the SEEK 2017 conference in San Antonio, Texas. I am a member at St. Michael Parish in St. Cloud, but now attend school at the University of Minnesota Duluth. Between UMD and St. Scholastica, we were able to take 95 students to the conference this year.

Throughout the week, we were given the opportunity to attend sessions from powerful speakers such as Jason and Crystalina Evert, Leah Darrow, Sarah Swafford, Mark Hart, John O’Leary and many more. Sessions touched on nearly every topic one could desire; Jesus’ Invitation to Greatness, Consecration to Jesus through Mary, men’s and women’s talks, relativism, bioethics, abortion, relationships, prayer, you name it!

Each morning began with the nearly 13,000 college students attending Mass and prayer with exposition. Passionate hearts sang at least two opening songs to allow time for all the 300 priests to enter mass each day. It was so incredible to witness so many youth on fire for their faith and to see all the priests that were able to attend Mass with us. Over the course of the week, students from around the country formed friendships and shared in their joy for Jesus Christ. We were able to attend an 80’s themed dance, a concert performed by “The Oh Hellos,” browsed through informational booths, roamed the streets of the gorgeous San Antonio city, and could talk to many sisters, friars and priests.

The most compelling part of the entire conference was most definitely adoration and confession on Thursday night. Hearts cried out in the presence of Jesus and lives were transformed. Lines weaved all the way around the convention center for confession. Many times throughout the night, the emcees announced that students had to refrain from entering the confession line because it was a fire hazard due to the length of the lines! Over 4,000 confessions were heard that night alone (and many more throughout the retreat).  The atmosphere filled with the Holy Spirit was remarkable.

One thing really touched me during this time. I was in line for confession when I noticed on the jumbo screens that the priests had been walking around the conference room with the monstrance so that each person would get to witness the presence of God up close. Noticing I had at least a 30-minute line still ahead of me for confession, I was a little bummed that I wouldn’t be in the main room while the monstrance was being carried around each section of people. However, I found peace in being able to see it on the large screen. Being Catholic and having the opportunity to attend confession I have learned is such a blessing and one that I am so grateful for; doing it with over 300 brothers and sisters in Christ at the same moment was even more life changing.

After walking out of confession and into the larger adoration room, I saw Jesus, in the monstrance, was coming right around the corner where I was! I had been so worried about missing this part of adoration, but now I realized I wouldn’t be missing Jesus up close at all! At the same time, the lyrics of the song being sung were “ ‘Cause You know just what we need before we say a word.” This was such an impactful moment for me. The Lord truly knows just what we need and will provide. As they rounded the corner with Jesus in the monstrance, hands were stretched out wide by many and, hundreds following in line behind to follow Jesus on his journey around the convention center room.

Another major thing that Jesus told me over the weekend was how important it is to simply extend an invitation to those around us, Catholic or not, in coming to know the Lord and the Catholic faith.  Many people shared their testimonies in the talks and around Texas in casual conversation about how they attended SEEK, some Catholic speaker at their parish, or even Mass only because they had a friend who invited them and encouraged them to go.  For each and every single one of those people, that invitation changed their lives, and now us 13,000 attendees are thrilled to go out and share God’s goodness with those back home.

Amanda Vasek is a young adult from St. Michael Parish in St. Cloud and is currently a sophomore at University of Minnesota, Duluth. When she isn’t studying or attending events with Newman Center, she is enjoying the outdoors, catching a sporting event, or eating ice cream!