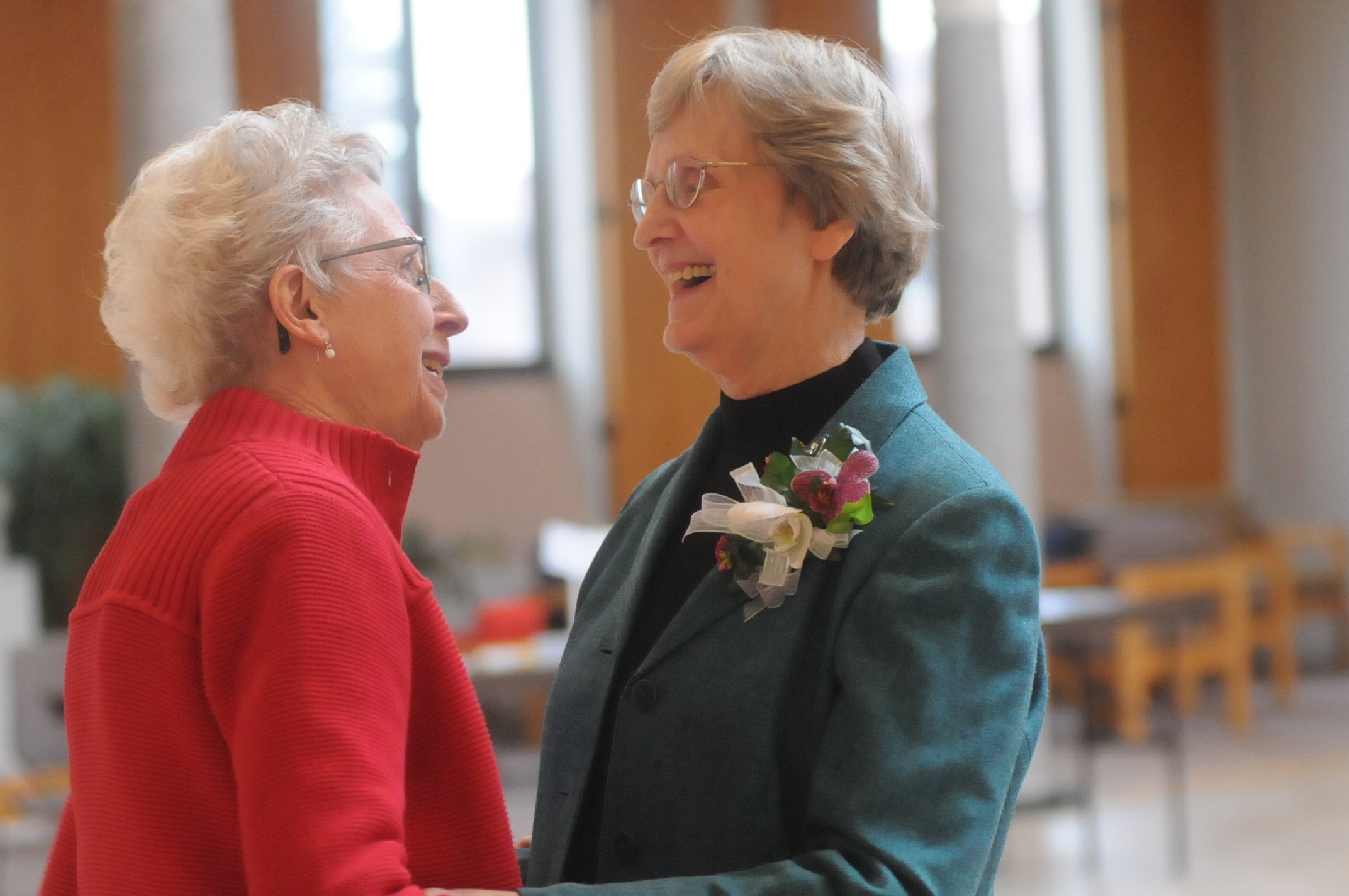 Early in March, I was up on a step ladder painting my 13-year-old son’s bedroom a brilliant red on one wall and a royal blue on another to coordinate with his two favorite baseball teams: the Minnesota Twins and the Chicago Cubs – who, by the way, he was a fan of BEFORE they won the World Series last year.

I was mid stroke with the paintbrush when I heard my cell phone ring. I had been alerted the day before that I might be “on call” if the Benedictine sisters were getting close to naming a new prioress. So I left my post and grabbed my phone, careful not to swipe the screen with the splatters of paint on my hands. And indeed, it was Sister Karen Rose telling me it was almost time.

Normally, I might be annoyed at being interrupted, that I’d now have to abandon my project, clean myself up and dash out to the assignment, leaving behind my family and unfinished work on a precious Saturday “off.” But, instead, I felt excited and I hurriedly showered, threw on some non-paint splattered clothes and some make up. Less than an hour later, I had my jeep warmed up and waiting at the house of our photographer, Dianne Towalski. The two of us then headed for St. Joseph.

As we walked into the vast gathering space at the monastery, it was very quiet. We were greeted by a volunteer who told us, “It shouldn’t be long now.” The great doors of the chapel were closed but from outside we could hear cheering and clapping. Then music began to play and we could faintly hear the sisters’ voices in song. After just a few more minutes, the great doors were opened wide and out came two sisters, Sister Agatha Muggli, vice president of the Benedictine Federation, and Sister Susan Rudolph.

The two sisters hugged tightly and then Sister Susan, the newly named prioress-elect, walked down the steps and awaited the greetings of each of her sisters. One by one, they came and hugged her, congratulated her, assured her of their support and love.

As Dianne captured the hallowed moments with her camera, I tried to drink in the beauty and sacredness of witnessing this blessed time. Many of the sisters whom I knew also came to welcome me. As Prioress Sister Michaela Hedican greeted me with open arms, I felt an incredible surge of love and admiration for these women of God. I felt the seriousness of their vocation, the resounding “yes” each had given to their calling, the reverence of their past, the excitement of their present, their hopefulness for their future. In those precious minutes there, I

It was a little like a trip to “Oz” for me – transported to a special colorful world with enchanting people who I felt like I’d known forever. It was a little like a dream, something to ponder and cherish. And just like the wizard in the classic movie, the sisters imparted gifts to take with me, gifts I’ve always had inside of me, given to me by the Lord, gifts I used to help tell their story.

And just like that, it was time to leave. Though I didn’t have sparkly red shoes nor the inclination to click my heels together, like Dorothy, I knew in my heart that there’s no place like home.

What seemed like only moments later, I was once again back on that trusty old step ladder, the bright paint bringing new life to the walls and new joy to my son’s eyes. In that brief window of time with the sisters, they, too, gave me new life, new joy and perhaps new understanding of my own unique God-given purpose as a wife and mother, and as a writer.

Thank you, Lord, for my vocation. Please help me always to use it to your glory. And thank you for the vocations of others through whom we can see you more clearly. Please help all those who are searching to find their own calling, that they may hear your voice and courageously answer. Amen.