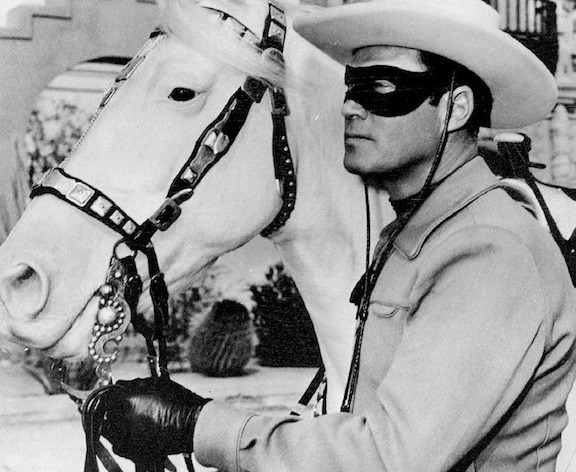 The other day was my youngest daughter’s birthday. By happy coincidence it was also my birthday. She turned 5 years old, and so did I (except that there’s another number in front of my 5).

Due to the “busyness” factor of our family, our birthday celebrations were stretched out over three days. Today, five days after my birthday, my wife found a present that Gloria had made for me. It was in a gift bag, and I had the honor of opening yet another present in front of the family.

Inside the gift bag were a couple of wads of tissue paper, and inside one of the wads was something wrapped and taped in more tissue paper.  Opening this I found an aluminum foil packet about the size of the palm of my hand. I opened the packet and inside were little pieces of aluminum foil, some were rolled up like balls.

My heart just melted. My daughter thinks I’m the Lone Ranger! I really like the Lone Ranger, but didn’t think my fondness for the masked man had registered with her that deeply.

Do you know why the Lone Ranger used silver bullets?  The movies and TV show about the Lone Ranger are based on a series of books by Fran Striker Jr.  I’ve only read the first one, appropriately titled “The Lone Ranger.”  It’s a fictional origin story of the Lone Ranger, giving the back story to his name and “accoutrement” (that’s French for all the cool stuff he wore).  It explains that silver is a fairly soft metal, so that bullets made of silver won’t kill anyone, but is more like a punch. As the Lone Ranger puts it: “I don’t shoot to kill. I want a silver bullet to be a symbol of justice.”

Fran Striker also wrote a “Lone Ranger Creed,” part of which reads: “… God put the firewood there but that every man must gather and light it himself.” Think of that the next time you gather around the old campfire. It’s fun to sit there and swap stories or jokes, perhaps trying to top the last whopper with something bigger and better.

Our mouths, like a six-shooter, are capable of shooting lead or silver. The Book of James, in Chapter 3 says: “For every kind of beast and bird, of reptile and sea creature, can be tamed and has been tamed by the human species, but no human being can tame the tongue. It is a restless evil, full of deadly poison. With it we bless the Lord and Father, and with it we curse human beings who are made in the likeness of God. From the same mouth come blessing and cursing. This need not be so, my brothers.”

This Lent I’m going to gentle my words, to try hard to control my mouth.  To think before I talk.  Maybe I really don’t need to top the last whopper.