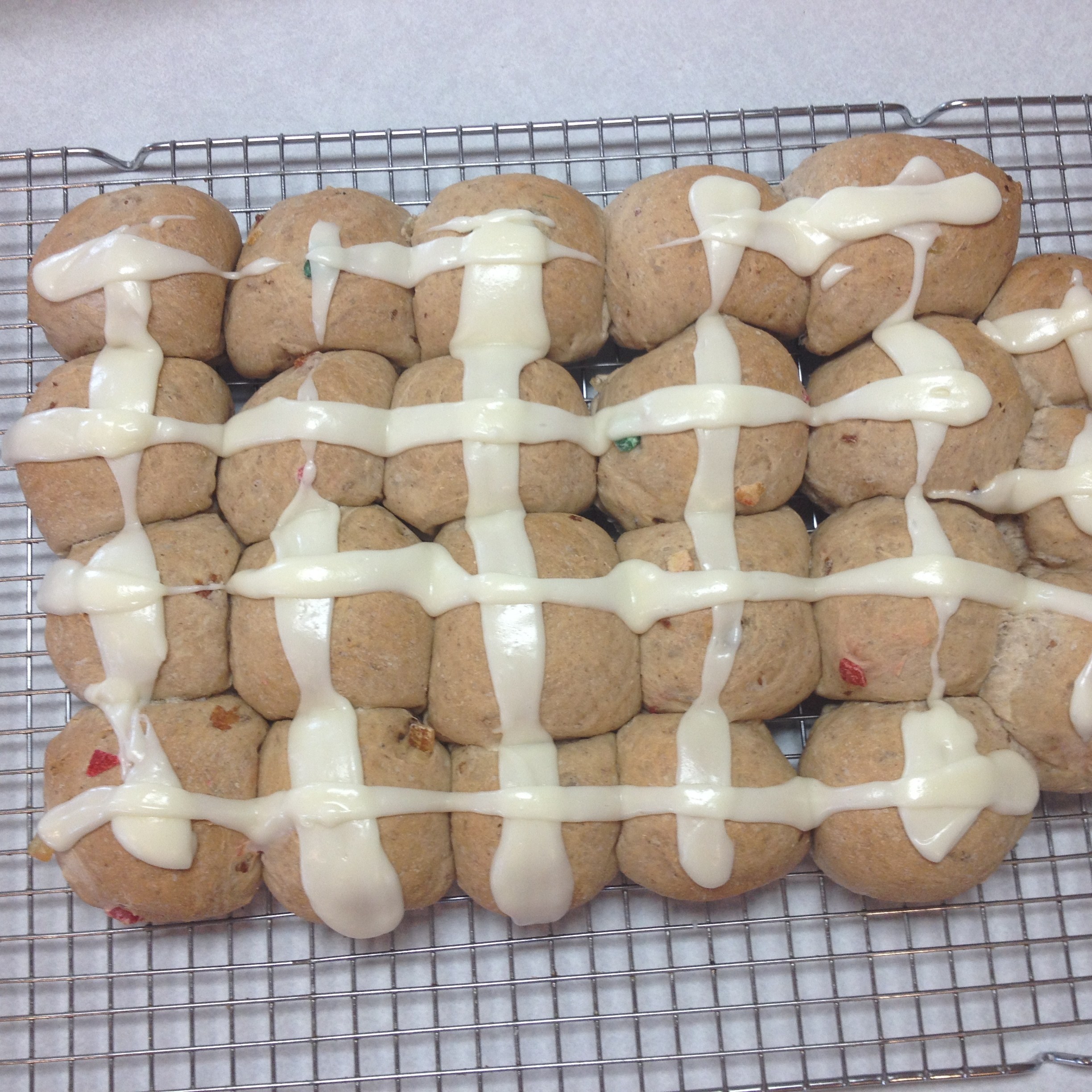 Hot Cross Buns have an interesting history behind them: the idea of marking crosses on baked goods such as bread, cakes and buns goes back to pre-Medieval times and was a visible sign that the bread was “blessed” and had the power to ward off evil spirits, as well as help with the longevity of the bread by stopping it from going moldy or becoming stale so quickly. A cross marked on the dough was also believed to help the bread to rise.

An image of the hot cross buns while cooling.

Although the name for Hot Cross Buns was commonly known as Good Friday Buns for nearly a hundred years, during the 1730s the buns were starting to be sold on the streets and therein the name as well as the popular rhyme emerged, as the sellers would shout out “One-a-penny, two-a-penny, hot cross buns”….a penny for a larger bun or for two smaller ones. Nowadays, you can buy Hot Cross Buns all year round, which some people think is a shame, as it cheapens and weakens the history and traditions behind this wonderful spiced bun.

Personally, I had never made Hot Cross Buns but I received a catering order for four dozen of them from the Melrose-cluster Liturgical Director for the second grade Learning Centers in preparation for their First Communion. Upon Googling both the history and numerous different recipes for Hot Cross Buns, I came up with a plan. If I would have had cardamom on hand, I would have used that but instead, I went with cinnamon, nutmeg and cloves to spice my buns. Also, the recipes ranged from using raisins, currants and other dried cut-up fruit. I used raisins and diced fruit cake fruits because that’s what I had on hand. And, I used my bread machine (my kitchen wouldn’t be complete without at least one sitting on the counter!) to mix and knead the dough. If you’d rather make yours totally from scratch, here’s the general recipe I followed:

In a small bowl, dissolve yeast in warm milk. In a large bowl, combine eggs, butter, sugar, salt, spices, yeast mixture and half of the flour; beat on medium speed until smooth. Stir in dried fruit and remaining flour to form a soft dough (dough will be sticky).

Turn onto a floured surface; knead until dough is smooth and elastic, about 5 minutes. Place in a greased bowl, turning once to grease the top. Cover with plastic wrap and let rise in a warm place until doubled, about 1 hour.

Punch dough down. Turn onto a lightly floured surface; divide and shape into 24 balls. Pinch and tuck dough under to shape into buns. Place on parchment-lined or greased baking sheets. Cover with kitchen towel; let rise in a warm place until doubled, about an hour.

Bake in preheated 350-degree oven for 12-15 minutes or until golden brown. Remove from pans to wire racks to cool slightly.

For icing, in a small bowl, mix confectioners’ sugar, extract and enough milk or cream to reach desired consistency. Pipe (in a plastic baggie with a corner cut off) or pour from a measuring cup a cross on top of each bun.

Previous Post “LORD, I am not worthy that you should enter under my roof…” Next Post New life