Contagious Excitement: The Potential in Everyone 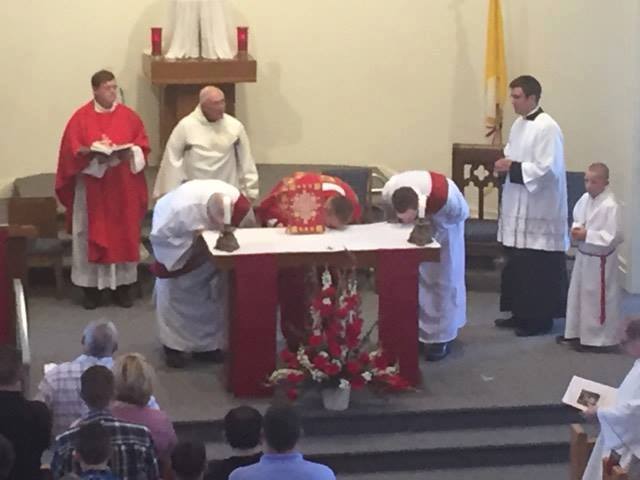 In a time when too many look upon vocations to the priesthood in a negative way for whatever reason – scandal, dissatisfaction, lack of engagement in the faith – I invite them to meet some of the priests I know, especially the most recently ordained one for the St. Cloud Diocese.

As our parish was preparing for the ordination of Father Derek Wiechmann, I happened across the words of Bishop Michael Burbidge of the Diocese of Raleigh, North Carolina, head of the U.S. Conference of Catholic Bishops’ Committee on Clergy, Consecrated Life and Vocations:

“What a beautiful life it is to live in community with those who are joined together by a sacred bond, to wake up every morning and have the beautiful opportunity to bring the compassion, love and face of Christ to others… It’s a life of great excitement, every day waking up not knowing where the Lord is going to lead you and whose heart he’ll touch with you being the instrument.”

That excitement was on Father Derek’s face before his first Mass in St. Rose on Sunday. Every day he will wake up with the opportunity to be a light to someone in the dark, to provide comfort to the hurting, to be with people in their best and in their worst moments. Priests guide, unite, and encourage. Their job descriptions include action verbs like “counsel, teach, prepare, help, hear, lead, celebrate.”

Imagine if we could all have jobs like that!  Truth be told, it made me jealous. I know, to be jealous of someone committing to a life as a Catholic priest seems a bit odd, but here I am.

Then I remember a homily by Deacon Rick Scherping a couple Sundays ago in St. Rose. He relayed the story of a little boy who set out to meet God. He thought it could be a long trip to where God lives so he packed his suitcase with Twinkies and a six-pack of root beer and started his journey. When he had gone about three blocks he met an old man. He was sitting in the park just staring at some birds. The boy sat down next to him and opened his little suitcase. He was about to take a drink from his root beer when he noticed that the old man looked hungry so he offered him a Twinkie.

The elderly gentleman gratefully accepted it and smiled at the boy. His smile was so pleasant the boy wanted to see it again, so he offered him a root beer. Again, he smiled at him. The boy was delighted! They sat there all afternoon eating and smiling, but they never said a word. As it grew dark, the boy realized how tired he was and he got up to leave, but before he had gone more than a few steps, he turned around, ran back to the old man, and gave him a hug. He gave him his biggest smile ever.

When the boy opened the door to his own house a short time later, his mother was surprised by the look of joy on his face. She asked him, “What did you do today that made you so happy?” He replied, “I had lunch with God.” But before his mother could respond, he added, “You know what? He’s got the most beautiful smile I’ve ever seen!”

Meanwhile, the old man, also radiant with joy, returned to his home. His son was stunned by the look of peace on his face and asked, “Dad, what did you do today that made you so happy?” He replied, “I ate Twinkies in the park with God.” Before his son responded, he added, “You know, he’s much younger than I expected.”

Deacon Rick pointed out that all have a smile to share. We all can do the smallest act of caring, and with that the potential to be Christ to those around us. So maybe we were not called to be priests like Father Derek, but we can share in his excitement — not just in his potential and future, but in our own. We can all follow amazing men like Father Derek and Deacon Rick, not knowing where Lord is leading, but armed with our Twinkies, root beer and pure, genuine excitement as we embrace the opportunity to find out.

Sheila Hellermann is a member of and trustee from St. Rose of Lima Church. She works at St. John’s University as a program and department coordinator for several academic departments.