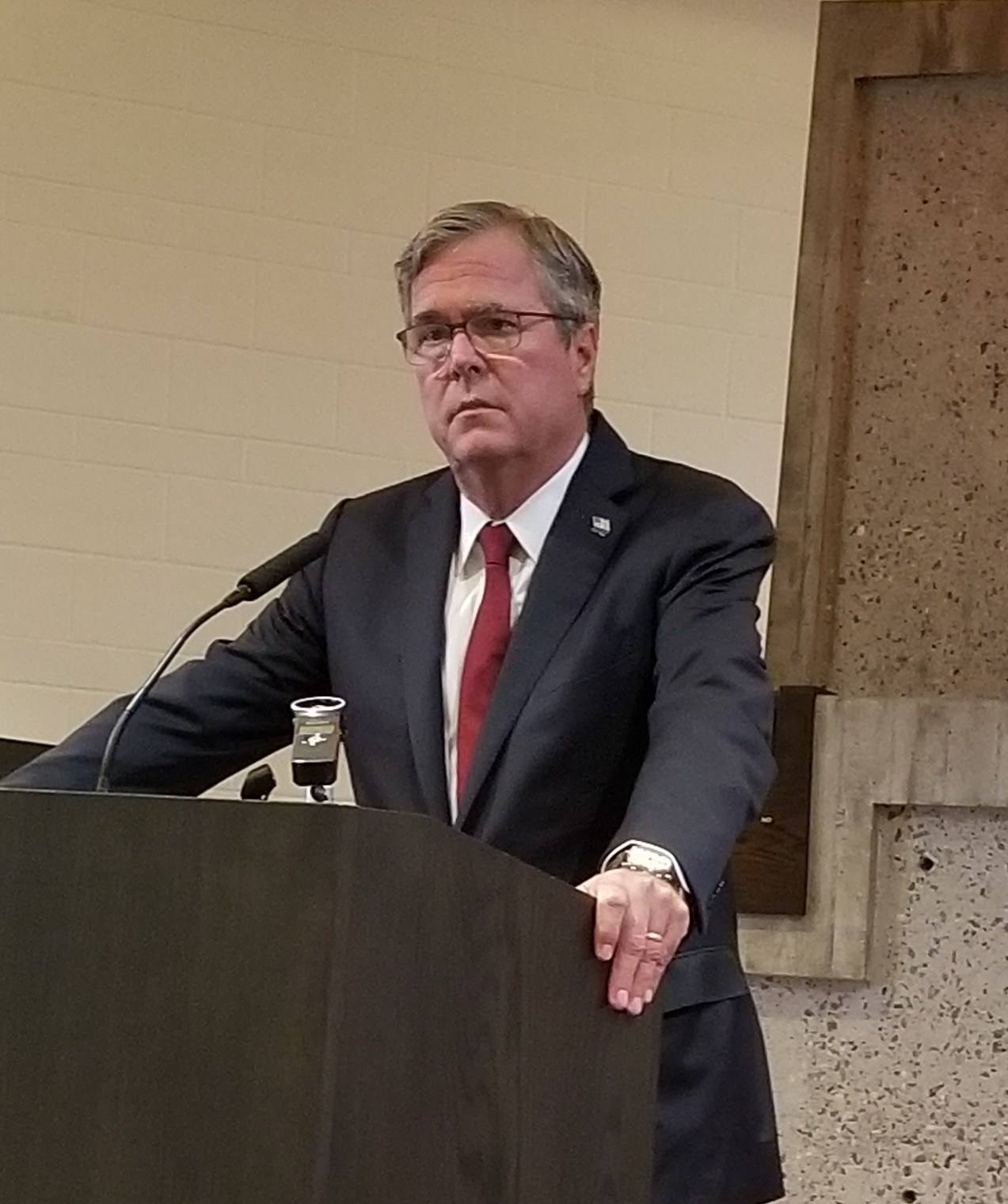 First, a little background. Born John Ellis Bush, he was nicknamed Jeb for his initials. He is the son of George H.W. and Barbara Bush. George H.W. served as the 41st president of the United States from 1989 to 1993 and the 43rd vice president of the United States from 1981 to 1989. Jeb is also the brother of George W. Bush who served as the POTUS from 2001-2009.

Gov. Bush was invited to St. John’s to speak on “Conscience and Courage” at the 11th annual Eugene J. McCarthy Lecture. Over 20 years ago, the governor converted to the Catholic faith and still practices today.

So, while most other sources were interested in hearing his political views on trending topics, my sole purpose (or soul purpose, you might say) was to find out how his faith impacts the decisions and work he does as an elected official. I asked him if he had a role model in this faith life. His response:

“Jesus. That’s about as good a role model as we can have.”

As far as how his faith influences his work, he said:

“As imperfect as we are, to be guided by your faith, you can’t ignore that. I never understood how [as a person of faith] as a public official, that’s ‘private,’ that I can’t act on my faith in the public square. Why do you have it? It should be one of the most important parts of how you go about your business.

And as governor – no perfection here – but I did my best to act on my faith. I put the most vulnerable citizens in the front of the line. They had been languishing either not in any line at all or in the back. We expanded programs for the developmentally disabled. … We grew the economy and generated revenues that allowed us to prioritize a broken foster care system. … I acted on my faith. Those are core beliefs that come from the teachings of Christ.

I had conflicts in that regard as well. The state of Florida has the death penalty. Perhaps one of the most difficult things I had to do as governor was to sign death warrants and participate in the execution, irrespective of if they were innocent or not. That’s an awesome responsibility. That was really hard.

Every year we had a Red Mass [a Mass for judges, lawyers, law school professors, law students and government officials] in Tallahassee. The bishops would come up and pat me on the back for things I did that adhered to their teachings and always saved the death penalty as the last topic of conversation and politely scolded me for not acting on the teachings of the church.

In reality, when you put your hand on the Bible, you also are recognizing that you are trying to faithfully commit to the laws of the state. That was a law that a great number of Floridians agreed to.

But I would never suggest to a pers0n who was running for office, ‘You can be as devout as you want but keep it at home. Don’t talk about your faith, don’t act on your faith in the public square.’ That just doesn’t work. It’s not meaningful to you if [your faith] is not front and center.”

Though I would’ve like to have asked more questions, there just wasn’t time. Fielding questions from other reporters, Gov. Bush added that when he ran for president he “got out of everything.”

“After I ran for president, I got to rebuild my life the way I wanted which allowed me to stay more connected to my family, less travel and rebuilt the business I had before I sold my interest out with the same partners. … I have an education reform foundation … [I’m] living large in Miami. Four grandchildren. Life’s good.”

On civil discourse, he shared some “rules,” specifically:

“If you have a chance to find someone who doesn’t think like you but agrees with you on a particular subject, the requirement would be to pause, take a deep breath, embrace that person and form a coalition to get something done.”

He gave an emphatic “no” when asked if he will run for president again. He said he already had the “best job in the world” as governor, helping people to live lives of purpose and meaning.

When asked about his feelings regarding the current president, he said he is “not a big fan,” which he has made no secret of in the media. However, he kept it positive, affirming some of President Trump’s decisions such as judiciary appointments. He concluded:

Finally, when addressing a question on what advice he’d give to people who are talking politics over Thanksgiving dinner, he said:

“Turn off cable TV for starters. One thing that would be helpful would be to stop customizing how we get news. I really try hard to read The New York Times because I find it not to my liking. But I do it for that reason. I want to have different views. I don’t want to be so righteous about my own thinking that I’m less tolerant of other people’s views. … Challenge yourself to get outside your comfort zone and listen to people that don’t agree with you.

As it relates to the Thanksgiving dinner, don’t talk about the president. … Talk about things you have in common rather than things you want to argue about.”