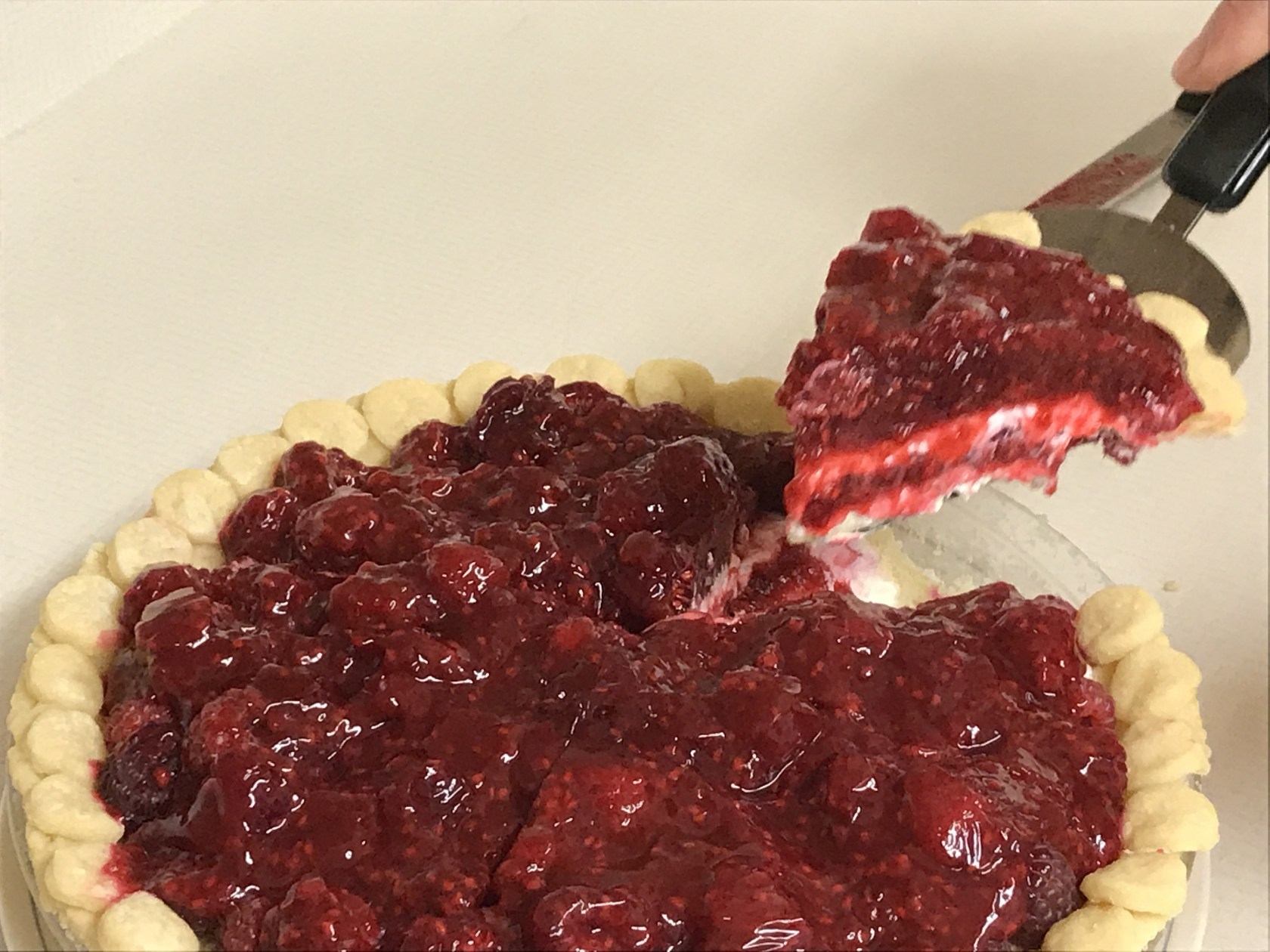 I love raspberries! And, it brings me joy to be able to pick the deep-red gems in my own backyard. I try to pick the precious little jewels almost daily during the growing season and choose only those that are fully ripe and delightfully sweet. Of course that puts me in competition with bees, birds and Asian lady beetles that prefer their raspberries plump and juicy, too. That’s OK — I don’t mind sharing a few with them. Mother Nature makes sure that there is an abundant harvest.

I have been raising the Autumn Bliss variety since 2009 and can vouch that this fall-fruiting plant lives up to its enchanting name. The canes start bearing large, delicious raspberries in August and continue until Jack Frost pays us a visit.

Recently, Wendy Gessell, who works in the Office of Marriage and Family at the Pastoral Center, baked a scrumptious dessert with some of the Autumn Bliss berries she and her husband, Steve, grow. I can only say that sampling Wendy’s Raspberry Ribbon Pie took me straight to “pie paradise”!

Combine flour and salt in a large bowl. Cut in shortening with a pastry blender until the mixture resembles coarse crumbs. Stir in the water until the mixture the forms a ball. Roll the dough on a floured surface and fit into a nine-inch pie pan. Flute the edges as desired. Prick bottom and side of pastry thoroughly with fork. Bake 8 to 10 minutes or until light brown — cool on wire rack.

In a large bowl, whip the cream and add the vanilla pudding mix. In a second bowl, beat the cream cheese, sugar and salt until smooth. Fold the cream cheese mixture into the whipped cream. Spread half into pie shell. Chill for 30 minutes.

Set one cup of raspberries aside and crush the other three cups. Put the crushed raspberries and 2/3 cup water into a saucepan and cook over medium heat. Bring to a simmer and cook until raspberries are soft. Mix together the sugar, cornstarch and remaining water and add to the raspberry filling. Cook until this glaze thickens. Cool to room temperature.

Spread the last of the cream cheese mixture over top of pie, taking care not to disturb the glaze layer beneath it. Chill for 30 minutes. Top with the rest of the glaze. Gently place each of the remaining raspberries over the top of the pie. Chill until firm.

A note from Carol:

Wendy’s husband, Steve Gessell, is the maintenance worker for properties of the St. Cloud Diocese. Brilliant when it comes to growing just about anything, he formerly worked (for 10 seasons) as the rose gardener at the spectacular Clemens Rose Garden in St. Cloud. Steve spent 16 years developing the Honeybelle Honeysuckle Vine, which was introduced to the market in 2009. He’s the one who recommended the Autumn Bliss raspberries to me. (Thanks, Steve!). The Gessells are members of St. Mary’s Cathedral.