Rice Bowl recipes connect us with our global family 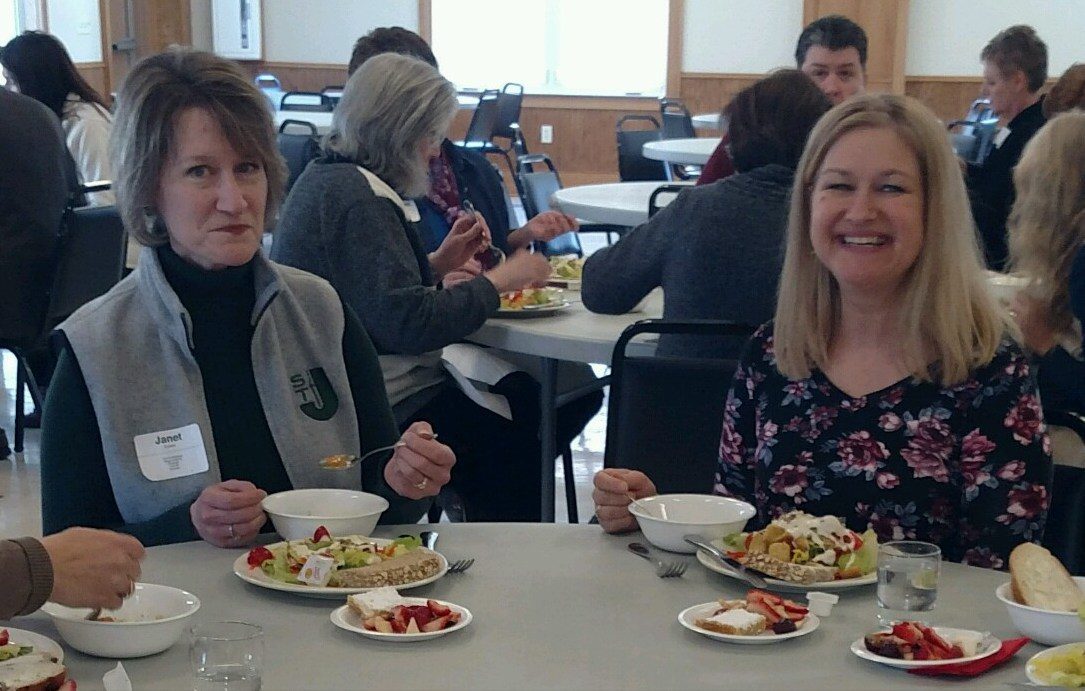 Janet Dusek, administrative assistant for the Office of Marriage and Family, and Sheila Reineke, Natural Family Planning program coordinator for the diocese, enjoyed the lunch — which included two Rice Bowl soups — at the retreat.

Yesterday diocesan employees gathered for our second all-staff retreat centered on StrengthsFinder, a program that we’ve been using to learn more about our own strengths and those of our co-workers and to assist all of us in exploring how we can best minister together as a team. Leisa Anslinger, a national leader in StrengthsFinder work, parish engagement and stewardship, led the retreat. We had a great day with team building activities, collaboration, self-reflection and prayer.

Iraqui lablabi (chickpea soup) and Haitian vegetable stew were on the menu at the February 21 Lenten retreat for diocesan employees.

Catholic Relief Services Rice Bowl played an important role in our day, too. Two of this year’s meatless Rice Bowl recipes were featured at lunchtime — vegetable stew from Haiti and chickpea soup from Iraq. Both soups received good reviews from those who attended the retreat!

CRS Rice Bowl is a Lenten program sponsored by Catholic Relief Services that helps parishes, schools and families learn more about its work around the world and the people it serves. Participants are urged to put the money they save from eating simple, meatless meals into a symbolic “rice bowl” to be donated to CRS. Perhaps you have saved the Rice Bowl pullout section from our February 9 issue or have viewed the section online. This year’s theme is “Who is my neighbor? Called to be companions on the journey.”

Kateri Mancini, who has recently been named the new director of social concerns for Catholic Charities of the Diocese of St. Cloud, coordinated the preparation of the Rice Bowl dishes with staff of The Visitor. Kateri has worked as the coordinator of mission education at the St. Cloud Mission Office for the last 12 years. (The Mass collection taken at the event was earmarked for Rice Bowl.)

This year Rice Bowl offers recipes for cheese soup with fritters from Nicaragua, bean cakes from Burkina Faso and vegetables with rice from Malawi in addition to the Haitian stew and chickpea soup.

Perhaps you remember a Rice Bowl recipe you’ve enjoyed from past years or would like to explore other meatless options during Lent — or any other time. Recipes from 2013 to the present are featured on their website. One that I want to try soon is the bean soup with squash and rice from Honduras. It is a Rice Bowl favorite of our editor, Joe Towalski and his wife, Dianne, Visitor multimedia reporter and graphic designer.

Here’s the recipe for the Honduran bean soup with squash and rice. I hear it’s delicious!

Previous Post Musicals, comfort zones, and other things that scare you Next Post Lent: Our Season of Love