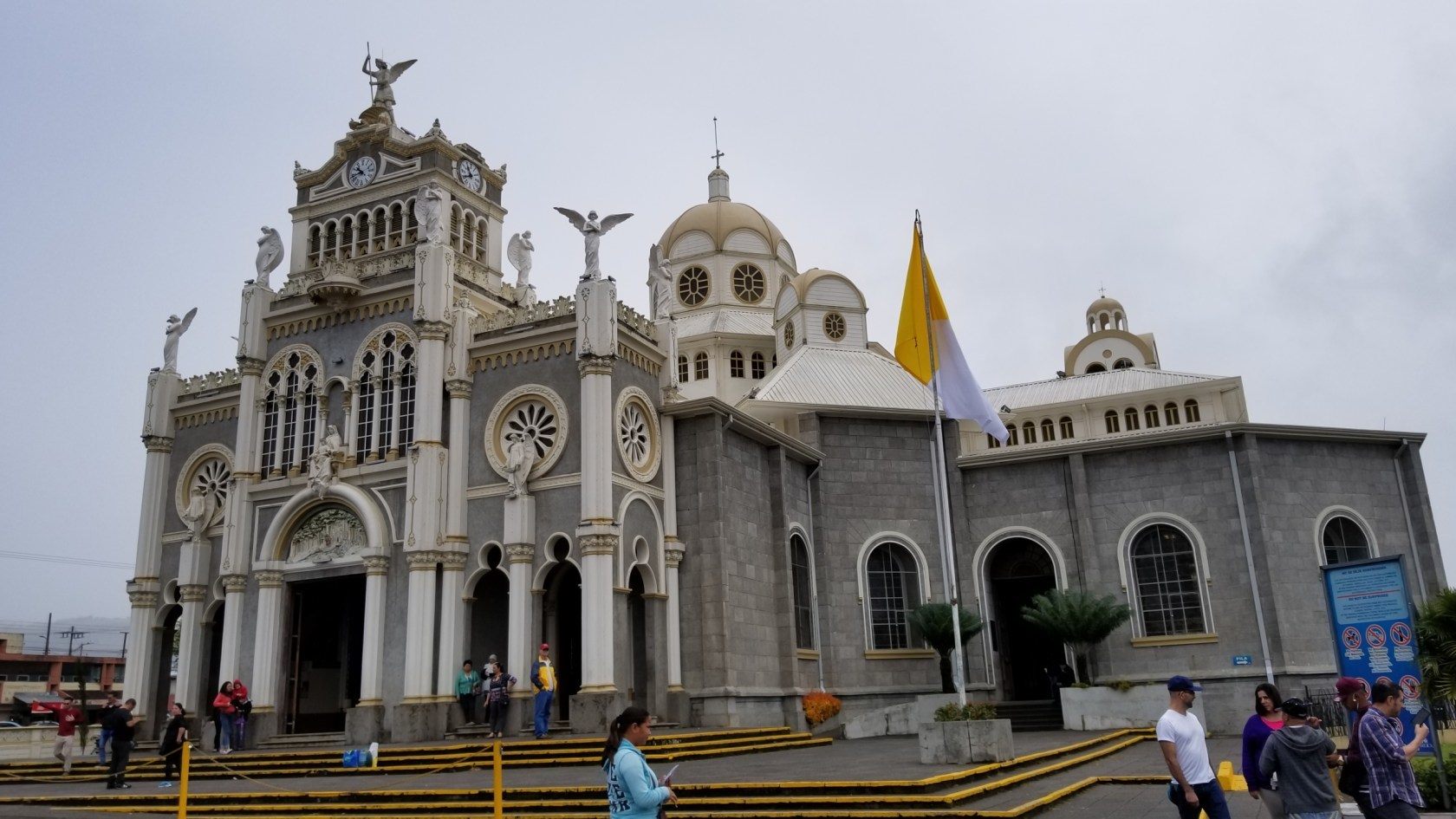 Sheila Pulju is a guest blogger and a member of St. Boniface Church in Cold Spring, where she lives with her husband, Rich.

Recently, my husband and I visited Costa Rica, and one of the highlights during our vacation was our one day trip to Cartago, a city in Costa Rica about 16 miles from the capital San Jose. The main historical attraction in the center of Cartago is the Basilica de Nuestra Senora de los Angeles (Basilica of Our Lady of the Angels), which is a Roman Catholic Church and dedicated to Virgen de los Angeles (the Lady of the Angels and national patron of Costa Rica).

Basilica of Our Lady of the Angels in Cartago, Costa Rica

The Basilica is consecrated to the Virgin de los Angeles, which supposedly represents the Infant Jesus being carried by the Virgin Mary. Many pilgrims come to the Basilica daily all year in hopes of resolving health or other issues in their lives.

The church is beautiful with an interesting and unique story behind it. A peasant girl from Cartago supposedly found a black stone statue of the Blessed Virgin Mary and her baby (La Negrita) on a rock, and she brought it to her home. When she went to get the statue in her home the next morning, she could not find it, but instead found it was back at its original location. She then gave the statue to her priest and he locked it in a box! The next day, it was again back on the rock!

The church was destroyed many times by earthquakes during construction. Consequently, they then built the church on the exact location where the La Negrita statue (Queen of Cartago) was found. The statue is inside a golden shell inside the church. In 2004, there was a major renovation and chapels added to the church making it more spiritual much like the churches in Italy.

The Basilica is a true treasure in Costa Rica. It is famous for the annual August pilgrimage when thousands of devoted Catholics from around the world walk or crawl the 22-kilometer trek to the church during the Romeria pilgrimage. Actually, many pilgrims were crawling up to the altar while we were touring the church.

Also, on the same location where the statue showed up, there is a holy water spring where people drink the water, wash themselves and/or collect holy water in containers. The water has been tested and found safe needing no chemicals or purification systems and continues to provide water to this day. Many miracles have been reported.

Some places just leave you speechless with its divine beauty. This church is one of them and so beautiful inside and out with amazing architecture, stained glass, sound acoustics and gorgeous internal decor. It is finished in a white and gray façade with a blend of 19th century Byzantine and Colonial architecture style, which makes it a bit different than a lot of other Catholic churches.

Everything about this church was intriguing from the story on how this church was built to the numerous people who enter this place on their knees in prayer, from the story of multiple failed attempts to build the church to the story of millions of people walking to the church in August. A special added gift was we were able to attend a Spanish Mass during our visit on a beautiful Saturday afternoon. There was also a Christian bookstore close by the church.

I highly recommend a visit to the Basilica de Nuestra Senora de los Angeles if you find yourself traveling to Costa Rica. Hopefully, it will be a highlight of your trip, as it was for us. This Basilica will take your breath away!

Sheila and Rich Pulju are members of St. Boniface Church in Cold Spring, Minnesota. They recently traveled to Costa Rica and made a pilgrimage to the Patron of Costa Rica in Cartago, which is located a few miles from the capital city of San Juan.