The Grotto of Lourdes (part two in a series) 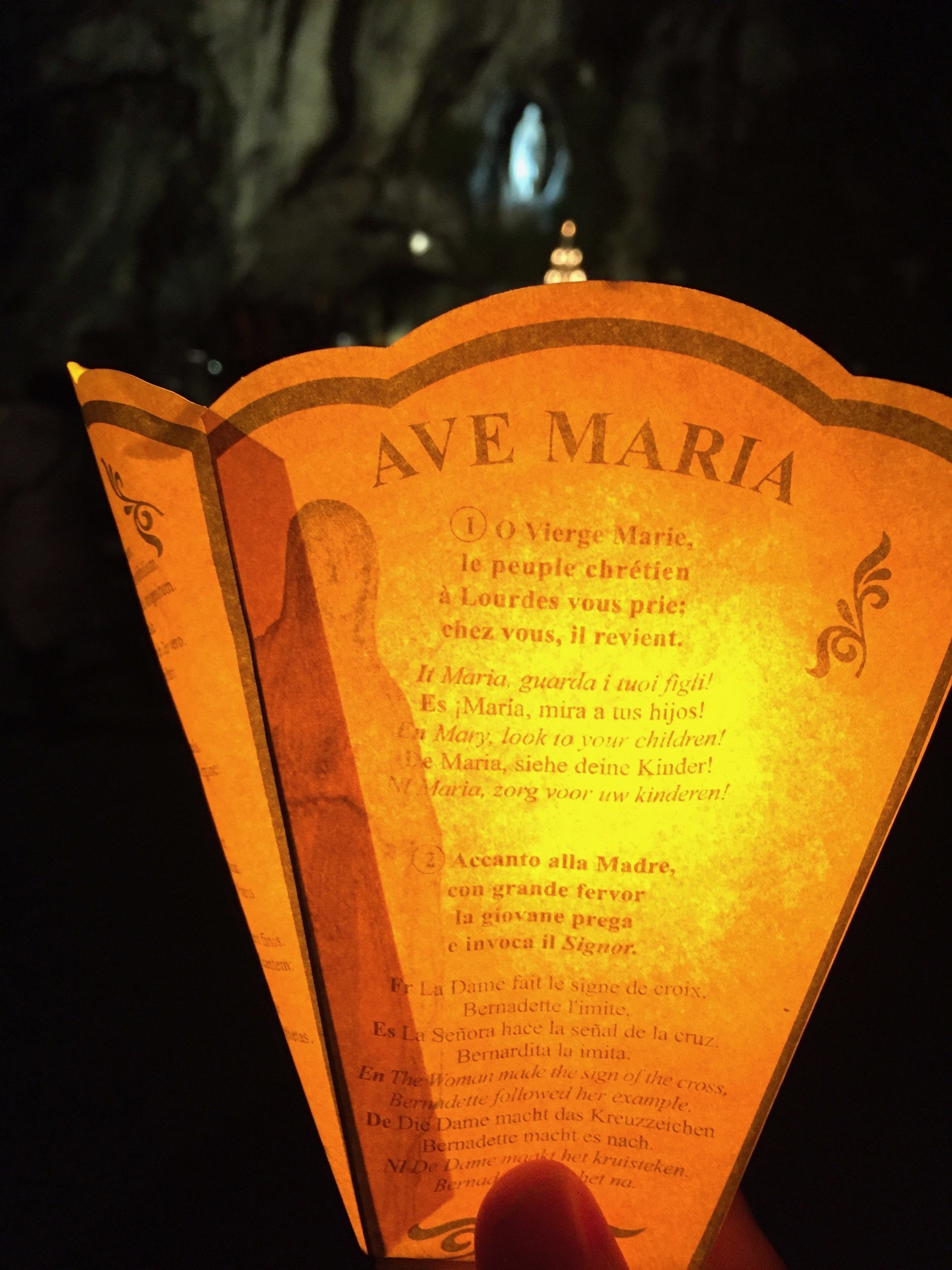 Guest blogger Yvette Piggush shares reflections about her recent trip to Lourdes, France. This is the second in a series.

The grotto at Lourdes. The statue marks the niche where Mary appeared to St. Bernadette.

The shrine of Lourdes in southern France commemorates the apparitions of the Blessed Virgin Mary to Saint Bernadette Soubirous between February 11 and July 16, 1858. The majority of these apparitions took place in February and March, but the pilgrimage season is from May through October. So, when we arrived in Lourdes in early March, we quickly learned one French word: fermé (closed). The tourist information office was “fermé,” many shops and restaurants were “fermé,” sites related to Bernadette’s life were “fermé,” and even the parish church was “fermé.” As a result, we approached the shrine itself with some misgivings about what might be “fermé” there.

Pilgrims touch and kiss the rocks of the grotto as they pray.

But the fact that the town was “fermé” meant that the shrine itself was very open. We joined a handful of other pilgrims for a rainy morning Mass in front of the grotto where the apparitions occurred. After Mass, we wandered freely in and out of the grotto. We viewed the spring welling out of the back of the cavern and touched the rocks polished by the hands and lips of millions of other pilgrims. I had expected barriers, lines, crowds, and lots of regulations. Instead, the grotto space was peaceful and largely empty, a mixture of shrine and park. I watched a nun kneel on the ground absorbed in prayer; a grandmother snap photos of her sticky-faced grandson; and a couple have an animated, whispered discussion about their relationship. People carried out their lives at Mary’s feet, praying, nurturing, and loving unselfconsciously and without shame.

Night life in Lourdes: a candle-lit procession with the grotto in the background.

I understood then that the real world at Lourdes did not consist of the shops, hotels, and tourist sites that were “fermé.” The most real world, the world where people became present and alive, was at the grotto. There it was just us and Mary, the silence and the weak spring sunlight, as it might have been for St. Bernadette 160 years ago. There, God had made an opening to His love that could never be shut.

Yvette Piggush is active in St. Mary’s Cathedral parish in St. Cloud. She teaches in the English Department at the College of St. Benedict and St. John’s University. When she isn’t reading something, she may be found baking desserts, going on long walks, and enjoying time with her nieces and goddaughters.