Give some, receive more 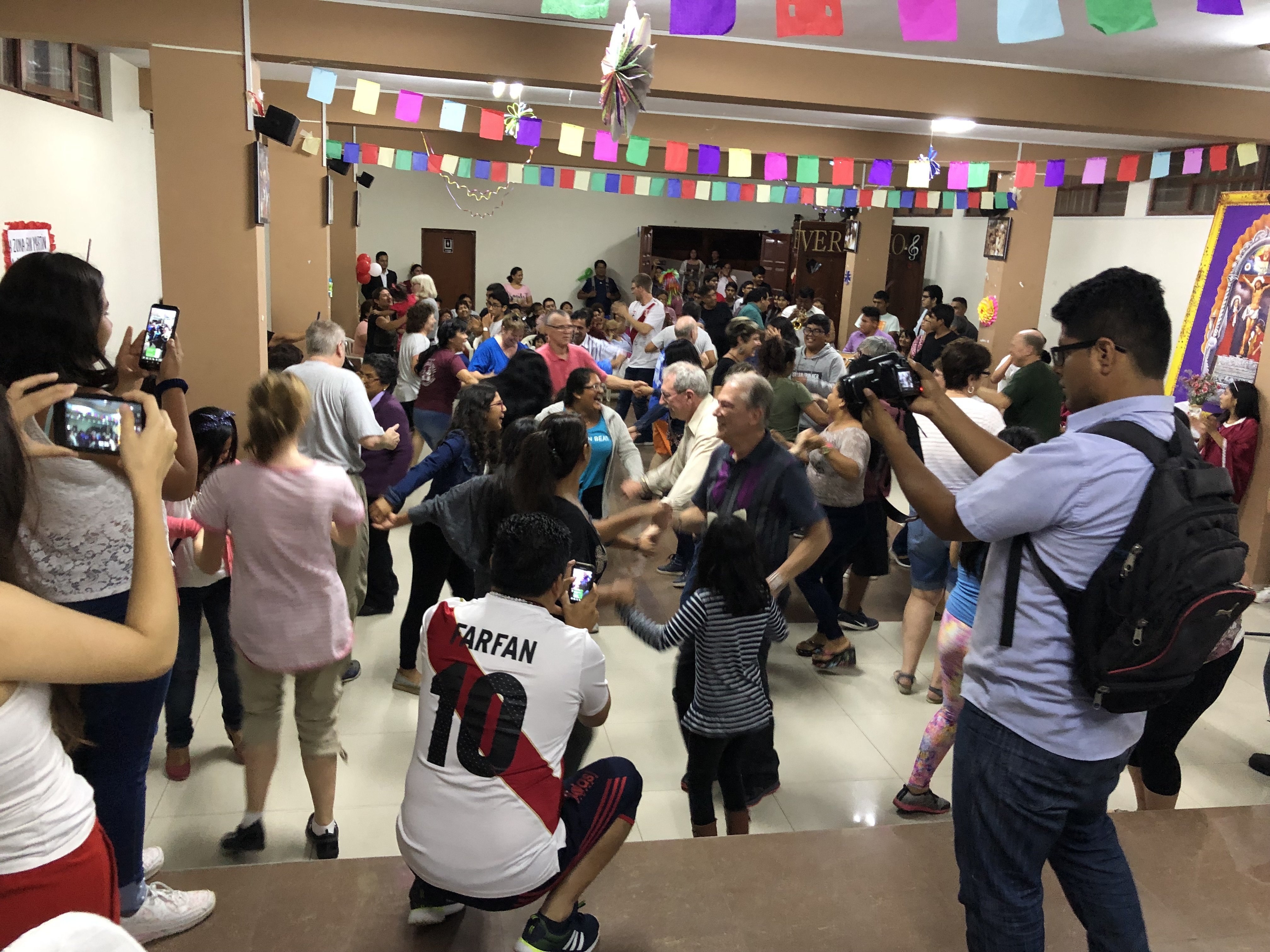 The experience of going on a mission trip means to give some, and receive more.  I was profoundly blessed by this ‘could never possibly give more than received’ experience when I traveled with a group of people, primarily from Our Lady of Victory Church (OLV) in Fergus Falls, to live and do work coordinated through The Parish of the Holy Family in Chimbote, Peru. The sister parish relationship between these two communities is fostered through a deep and abiding friendship between Fathers Alan Wielinski and Lucho Palomino, and the leadership, coordination and assistance on this particular trip by Mayme Hofland of OLV and Father Jeff Ethen of St. Leonard’s Parish in Pelican Rapids and St. Elizabeth’s Church in Elizabeth.

There are so many aspects and experiences I could write about for this blog, as each of the 12 days spent in travel, cultural immersion, and joy-filled work is deserving of such focus. In the interest of space, I will share about two aspects: my introduction to the Holy Family Parish community, and a morning working at a school. 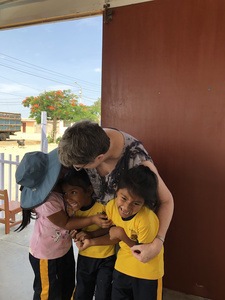 When our bus arrived in Chimbote, there were several parishioners at the bus depot with trucks ready to help load luggage, giving us our initial introduction to what it means to be served by this community, and the amazing communication skills of Father Lucho. When the truck my roommate and I were riding in arrived at the church, everything appeared empty, as it was dark, though there were some pretty glowing lights on the outside of the building. And then the magic began to happen. Children in choir robes came out with a ‘Welcome from the Youth’ banner;  a small band including bass drum and trumpet played; people started dancing with us and led us into the parish hall. At the entrance, more youth were there with bouquets of roses for each one of us. 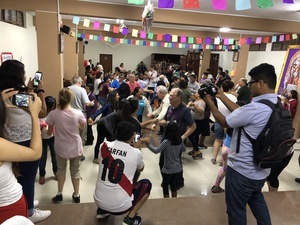 The hall was filled with joyous people. They could not wait to hug and kiss you, no introduction needed. I began to cry because of the beauty of it all, and the feeling that this could be similar to what it is like to arrive in heaven. I got a sudden surge of fear knowing I had left my backpack outside, but all was well as every piece of luggage had been brought inside to line a hallway, and besides that, there was a delicious meal awaiting us, along with displays of various cultural dances of Peru, demonstrated by dancers from young to old. In twos or threes, we had been assigned by Father Lucho to stay with very willing parishioners in their homes, and that night we met our host families and departed to these places of hospitality. 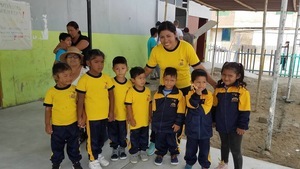 One of the projects Father Lucho had for us was at a school for children ages 4 and 5. School was not in session because on that side of the equator they are on summer break. However, the principal, along with children in their uniform shirts (paid for in part by past donations from OLV), were there to meet us, along with some of their parents.  The walls of this school were paper thin with several holes. The land around is all sand, so much cleaning was needed before the walls that would stay up could be painted.

This was a morning when everyone from the Minnesota mission group was present at the same location. At other times throughout the trip, we would self-select according to our skills or ministry charisms. For example, some did much more work at the school than I did, because in the afternoon I chose to go with the group doing home visits and deliveries.  I also know my gifts are more in the areas of visiting at an orphanage or nursing home, which I found delightful, than in accomplishing manual labor, which for some included completing a much needed roofing project. 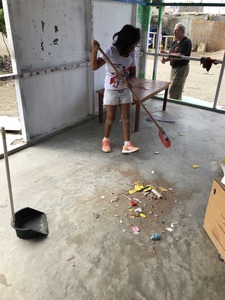 That morning at the school, while others did demolition, nail removal, installing new walls and painting, my job involved a date with the wash bucket and broom. However, more and more children would come to ask if they could “ayuda” or help. So I became the rag, bucket, broom and dust pan delegator, or as one of my mission friends called me, “the babysitter.” I do rather liken it to a Mary Poppins’ experience of putting an element of fun into work, and hopefully contributing to the pride these children will feel when they return to their fresh and shiny school after summer break. 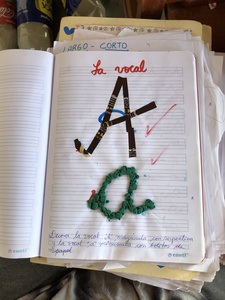 While the children either cleaned or put together puzzles, I went through teacher materials and with a slightly damp rag wiped off the dust. As a former elementary education teacher and St. Ben’s education graduate, I found the teaching techniques I saw during this materials and teacher manual review intriguing and fun, with tactile methods such as gluing corn on pictures (thus the corn to sweep off the floor!); yarn, tape, and balls of clay to outline letters; and the emphasis on Jesus in many of the worksheets.  And one of the children could easily have a future as a photographer, as some of my favorite cell phone photos from that morning were taken by her. 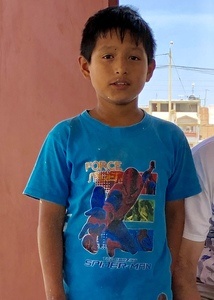 One Peruvian family who was present with us particularly left an impression on me. The  husband worked very hard with the demolition/construction tasks of the project, and his wife helped with the cleaning, despite also having a little one on her lap. A boy came to me toward the end of the morning saying he was hungry, and acting as if he wanted me to take him somewhere to eat. I asked him if his mother and father were there, and when he brought me to them, I realized he was the son of this hard working couple. Soon after, the family left, waving their goodbyes. I had enjoyed interacting with the father as we could try to communicate about the New York Yankees, based upon his ball cap, and I learned through his writing on a piece of paper that his job is selling fruit. Little did I know that I would see them again later that day when doing home visits to the poorest of the poor areas. Here, that family who had been working at the school, was part of the group Father Lucho had determined to be most in need of receiving our supplies. The boy seemed so proud to have us come to his home. As we drove away, he stood waving from a distance, and then, for those lucky enough to see it, he performed a cartwheel.

Praise be to God for the people of Peru.  They truly made my heart do cartwheels. 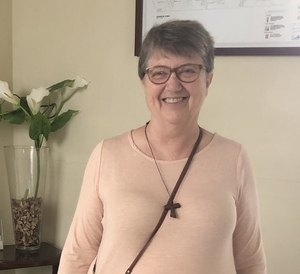 Deb Forstner is daughter of Bob and Joan Forstner of Fargo, ND. She is a graduate of Fargo Shanley High School, the College of St. Benedict, University of Wisconsin-Stout, and St. John’s School of Theology. She worked for many years in the St. Cloud schools as a school psychologist. She currently serves as a NACC-certified chaplain at Lake Region Healthcare in Fergus Falls and is a member of Our Lady of Victory Catholic Church. She is the owner of two rescue dogs; one of which is a certified therapy dog who at times accompanies her in ministry, named Deacon.

Thank you, Deb, for sharing with others the memories,that have imprinted your heart♡.

Thank you Deb for relating the “mission” experience. I have often been cynical of these events, wondering just how much they serve people in need. You have changed my cynicism somewhat.

Previous Post Exodus 90 – a way to deepen faith in a radical way Next Post Despite suffering, there is always something to be grateful for