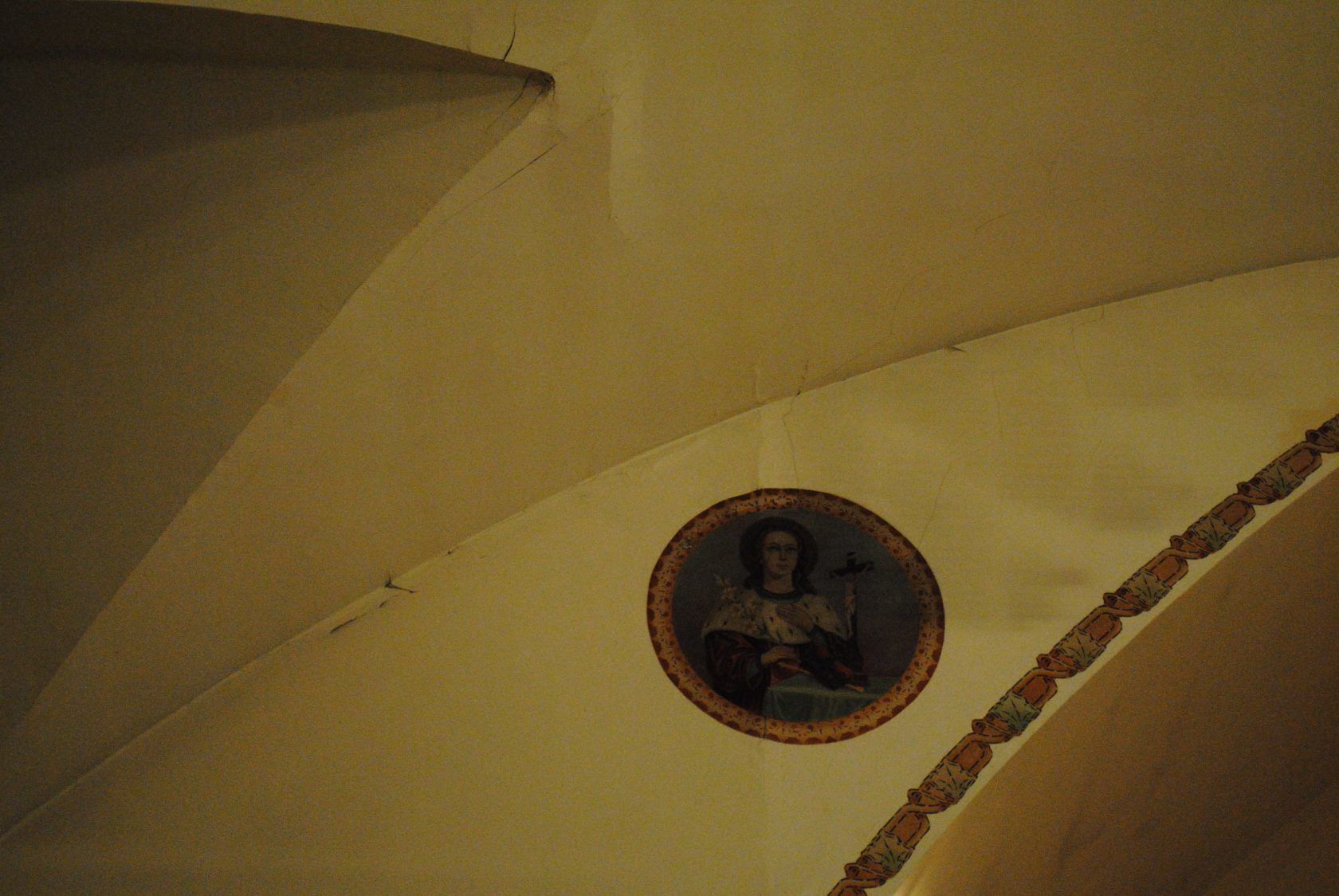 Stephen Miller blogs about his family’s adventures – and challenges – in attending daily Mass in a rural area. This is day two in a six-day series, as Stephen says, because “Sunday is a given.”

Yesterday, going to Mass was easy. When it’s just Jenna and I there are so few complications. Today we’re up again at 6:30 am. Vera (11) and Gloria (5) are both feeling better and are going to attend with us.

A view of the altar at St. Stanislaus Church in Sobieski. Photo courtesy of Stephen Miller.

I scarf down 1/2 a banana and a cup of coffee for breakfast, and Jenna does without. Unfortunately the usual charming breakfast rituals of the kids seem to stretch out longer. Later, most of us are dressed and ready but Gloria is taking a little longer with her pink sparkly shoes than usual.

The one-sided (my side) conversation as we leave the porch goes something like:

“C’mon Gloria, you can pet the kittens later.”

“No Gloria, put the kittens down.”

“No Gloria they don’t allow kittens in church.”

In the car and off we go, once again down the Todd-Morrison County Line road. Only this time we turn on Highway 27 and take the Flensburg exit.  We drive through Flensburg (“Oh look, the liquor store is for sale.”) and then on to Sobieski.

The floor at St. Stanislaus Church in Sobieski. Photo courtesy of Stephen Miller.

Arriving at St. Stanislaus (at 8:05) we park in the “lower” parking lot and climb the two flights of stairs up to the church. As we open the doors we can hear Father Jimmy Joseph reading the first Scripture reading.  Thoughts of excommunication for being late and “we really ought to get rid of those kittens” cross my mind.  After all, WWSPS (What Would St. Paul Say?).  We take a pew a bit further in the back than usual so as not to distract the 11 parishioners who arrived on time.

Father Jimmy has a lovely singing voice and I wish there were more opportunity in this Mass to hear it.  I think Father Jimmy, Father Matthew Crane, and Father Aaron Kuhn should form a singing group.  Their first record could be a devotion to our Blessed Mother and they could call themselves “The Mama and the Papas.”

After Mass Father Jimmy stops to talk with us (we used to be members of his parish in Randall). Then some of the ladies come up and start speaking with Jenna. It turns out that one of them knows Sister Jessica from the Schoenstatt Shrine down in Sleepy Eye. Since we’re involved and devoted Schoenstatters this is a joyful coincidence.

But I can’t stop looking at the interior of this church. It’s gorgeous! I start taking pictures, and then I can’t stop taking pictures. It’s like being in a National Park! Everywhere I turn there’s something incredible; so much history, so much beauty. Jenna said much the same later, but that it also has a very “homemade” feel. As if the artisans of the Church were very skillful, but made everything for love of God and not for money.  The interior of the church inspires worship, but the statuary and ornaments don’t feel pristine or sterile. They’re as if loving hands have caressed them over the years. Even the floor tiles, linoleum squares like you might see in an old drugstore, have the look of polished marble. I had to touch them to make sure they weren’t stone.

As we leave the sanctuary, we pass under a banner. I have no idea what it says, but I

know that I’ve been blessed.

Outside the skies are cloudy and mist is falling. We retrace our drive back home. I hurriedly fix lunch and dinner for myself to take to work (it’s going to be a long day). It was a roundtrip journey of 44 miles, with a priest from Karola, India and banners in Polish. I feel a little like I’ve just come back from a journey to a far-away and seemingly enchanted place.