“This is my body…this is my blood…given up for you.” 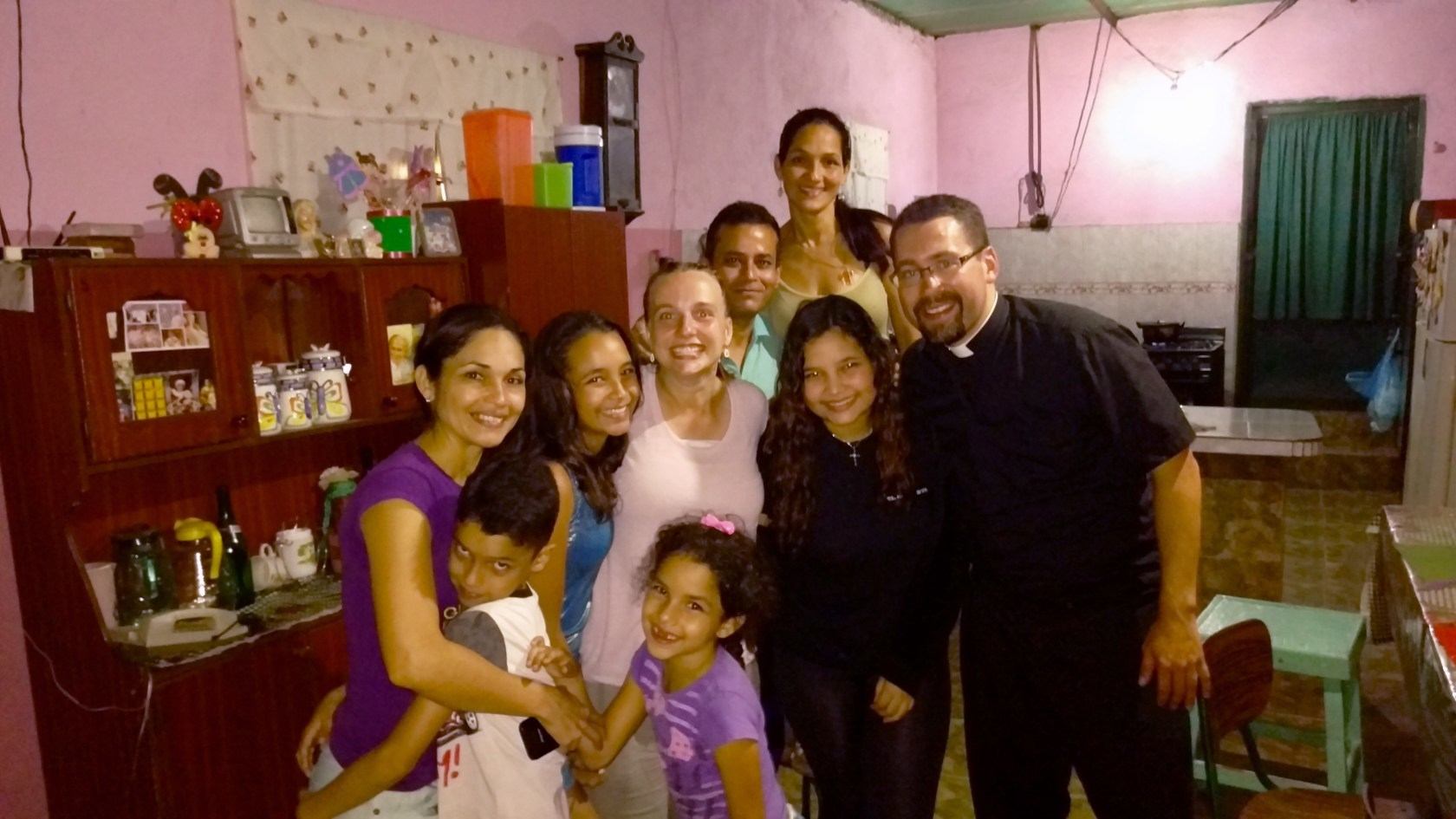 Alejandra knocked on the window of the truck and shook her head: more bad news.  We were on a mission to find Omeprazole, a simple medication for ulcers that Alejandra’s mother badly needed.  We had stopped at multiple pharmacies throughout the city and at each one we heard the same: none available. Fr. James Peterson threw the truck into reverse and started talking about other options. Magaly, hospitalized for a rare blood disease, needed only 5 days’ worth of the medication, surely it could be found somewhere.

Just two days earlier the Guzman family had welcomed us into their home in San Felix, Venezuela for delicious arepas and cake. The small house was adorned with images of the family, Pope John Paul II, and a few landscape paintings. Judi, Alejandra, Anita, and Raquel are all grown daughters of Magaly.  They are all employed, three work for a Catholic school and one sells high end shoes in the market. Judi has two children: Jesus and Susje (Jesus backwards) and Anita has two daughters: Franchesca and Stiphani (do not call her Stephanie).  Magaly, when not in the hospital awaiting blood transfusions, rests in the one room in their home that is air-conditioned. “Welcome to Minnesota,” they giggle as they lead us into Magaly’s room. She is curled up under a light blanket and it’s true—the room is reminiscent of a chilly fall day in Minnesota, a refreshing experience in the humid heat of Venezuela.

As we greet Magaly, her daughters all start talking at once but Anita catches my ear.  She asks me eagerly if I know just how much Fr. James is part of their family. I’ve noticed how the four kids are very comfortable around Fr. James, teasing him and referencing inside jokes.  I assure her how clear it is that Fr. James is part of the family.  But she starts to insist as she grips my arm:

“su sangre es nuestro sangre” (his blood is our blood).

I look at Fr. James thinking I’ve misunderstood but he’s nodding right along.  He starts to explain: Magaly needs monthly blood transfusions and there is a shortage of blood in Venezuela.  So, once a month, he goes to the nearby hospital to donate his blood which is transfused into Magaly a few days later.

We drop Alejandra and her sister Judi at the hospital but Fr. James is still determined to find the medicine somewhere.  He drives down the road toward the prison where a few of his parishioners are carrying out sentences for robberies.  He walks by himself into the pharmacy but comes back out empty handed.  “They have more than enough of the medicine,” he explains, “they won’t run out.  But one day’s dose is 30, 000 Bolivares.”  Earlier in the week he had explained that the monthly minimum wage in Venezuela is 90,000 Bolivares.  I shake my head in disbelief.

Sister Maricela, center, and Father James Peterson, with a sister friend at the airport.

All the time we spent driving around town looking for the medication has made us late to pick up the parishioners he agreed to drive to Las Josefinas.  Las Josefinas are an order of religious sisters serving the poorest of the poor in a neighboring city.  Because of diplomatic relations, one of the three religious sisters, Sister Maricela, has to return to her home country of Mexico. Sister Maricela is desperate to stay in Venezuela.  She has fallen in love with the people she is serving.  She sees the downward trajectory of the economy and the escalating violence in the country.  She confides that although she has served in a number of South American countries during her 17 years as a religious sister, none have struck such a chord on her heart strings as the past two years in Venezuela.  A number of the parishioners at Fr. James’ parish have grown to love Sister Maricela and asked Fr. James if they might join him in bidding her farewell.

As we drive through the barrios, event after event slows us down: a road is washed out, an elderly woman had the time wrong and needs 20 minutes to finish getting ready, a young woman reminds Fr. James he forgot to pick someone up.  As the truck bed fills with people I fear Fr. James is nearing a breaking point: he is weary from the disappointment of the search for medicine and Sister has called asking why he is running so late.

But just 30 minutes later the day’s weariness is forgotten: in the small white chapel of Las Josefinas, Sister Maricela smiles through tears as two small children grip the belt around her pressed white habit. A chorus of young women raise their voices in perfect harmony.  Father James lifts the simple wooden chalice and paten and prays the words of institution:

“This is my body…this is my blood…given up for you”.

My eyes dance between the white of the host and the white of Sister Maricela’s habit and I thank Jesus for her life, given up for the small children clinging to her side. As I raise the chalice to my lips, I thank Jesus for the gift of his most precious blood, for the sacrifice of his very self which has inspired others, like Fr. James, to hand over their own bodies in imitation.  And as I kneel and pray in thanksgiving, I marvel at God’s Church in Venezuela, and how in the midst of crisis, God’s presence is so tender, so real, so familiar.

Known to her neighbors as “the Church lady”, Joan is a woman searching for God’s voice and beauty in the example’s of Divine Grace she meets in her day to day life. She is particularly grateful God has blessed her with work at the Newman Center which focuses on bringing the energy of college students into contact with the dedicated pillars of the community.