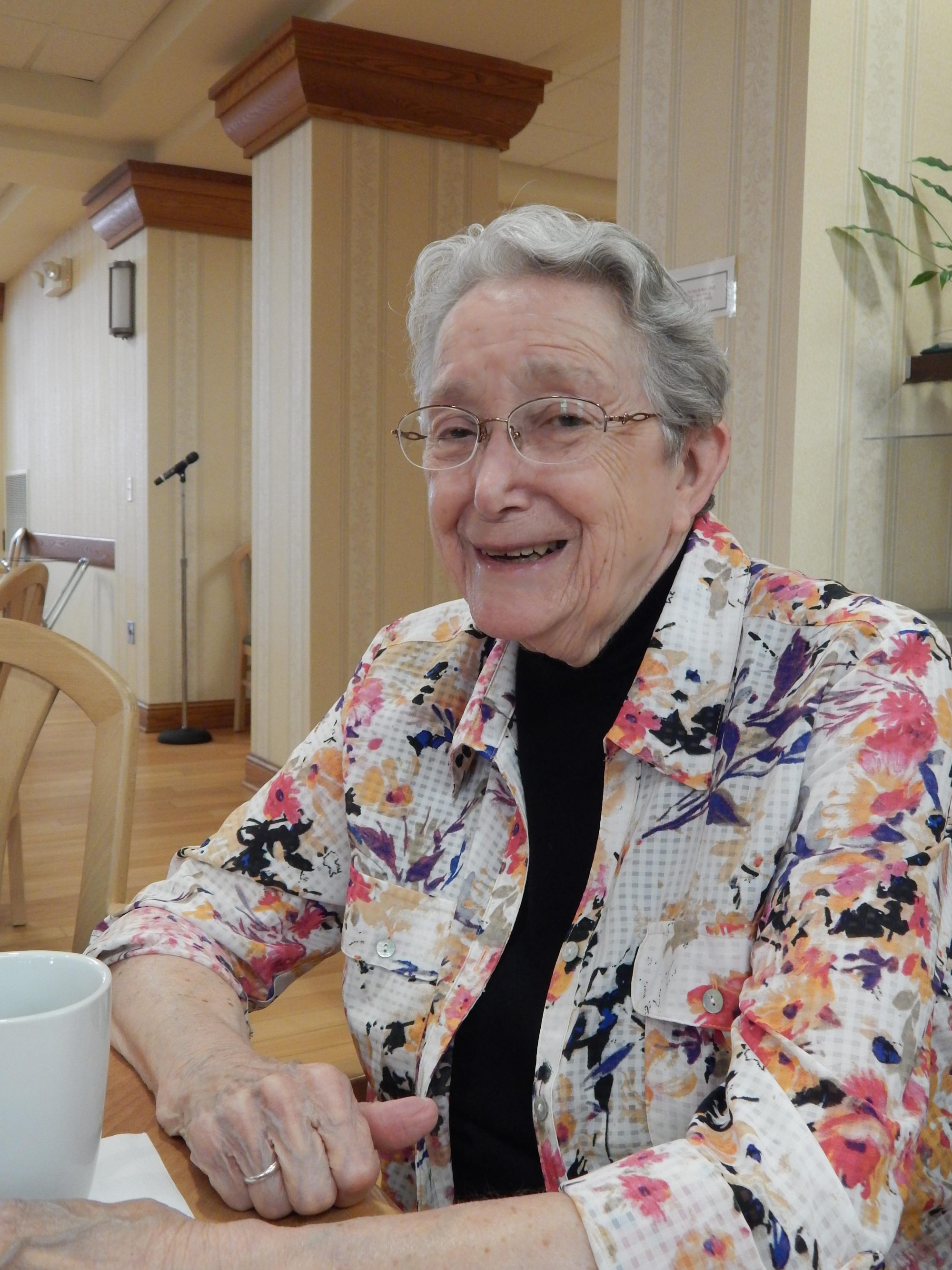 This story is written by guest blogger Tom Hintgen, eighth grade student of Sister Adela at OLV in 1961-62.

Former Our Lady of Victory School Principal Sister Adela Gross, known in Fergus Falls as Sister Mary Peter in the 1960s, has fond memories of her service to others. She is 87 and resides at the Franciscan Sisters of Little Falls campus.

After leaving Fergus Falls in the late 1960s she served as a missionary in Peru, worked with migrant farm workers in south Texas and other areas and served the Hispanic community in Melrose.

The aforementioned would deserve praise in itself. But it doesn’t stop there for Sister Adela.
From 1991 to 1997 she served with the Catholic Bishops Conference in Washington, D.C., coordinating ministry to people on the move.

“Part of our work included assistance to those who ministered to carnival and circus workers,” said Sister Adela to some OLV parishioners who visited her at her residence in Little Falls on May 5.
“Over the years I’ve been so thankful for the blessings of good health and a satisfying ministry,” she said. 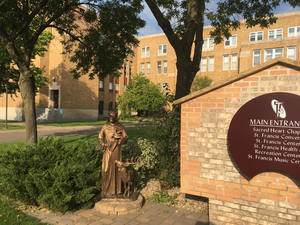 Sister Adela never forgot her years in Fergus Falls at Our Lady of Victory School. She returned for OLV school reunions over the years and has kept in touch with former students and members of the OLV congregation.
Former students at OLV remember Sister Peter bringing her class to the audio-visual room and seeing on TV the launch of astronaut John Glenn on Feb. 20, 1962. Glenn became the first American to orbit the earth.
Others recall the annual OLV eighth grade class trip to Duluth.

She always strived to attain more education, and in 1980 completed a Master’s Degree in religious education from Fordham University in New York.
Sister Adela traveled to China and for two weeks she assisted with the Catholic Church ministry in that country.
She never slowed down. Even in her late 70s she continued to minister to Hispanics in and near Melrose. She served close to 200 Hispanic families.

Her duties in Melrose included arranging for priests to celebrate Catholic Mass every week in Spanish, head sacramental preparation and religious instruction, and perform outreach.

On top of that she assisted with translating, helping people with forms and assisted those applying for housing and medical assistance.

She was a nun highly respected all across the Diocese of St. Cloud. In 2000 Sister Adela was the recipient of the Distinguished Service Award from the Office of Migration and Refugee Services in recognition of her service to migrant workers.

Her life has indeed been a life well lived in service to others.

Guest blogger Thomas Hintgen is a semi retired newspaper reporter who writes part-time for area weekly newspapers in Otter Tail County. He previously worked full-time for Fargo Forum, Fergus Falls Daily Journal and Pelican Rapids Press and spent several years in public relations for Otter Tail Power Company. He and his wife Sharon are members of Our Lady of Victory Church in Fergus falls and have two adult sons, Mark and Paul.

I just wanted to let you know that I thoroughly enjoyed this blog. May God continue to bless our aging religious as they share their wisdom and love to others. Peace and all good. Brother Ed

Previous Post How beautiful are the hands of God Next Post Surprised by God, a vocation story