No to violence, yes to peace

What I really want, dear reader, is to encourage you to watch the film, Romero, starring Raul Julia as Archbishop Oscar Romero of El Salvador, who is to be canonized this weekend in Rome!

Paulist priest, Bud Kieser, the indomitable producer of the film faced equally indomitable conditions as he searched for information and a place to shoot the film in this Central American country that continues to be rife with violence, poverty, and militarism these 40 years since Romero was martyred along with too many other priests, educators, religious women who suffered death for their collaboration with those who are still under the yoke of institutional violence. 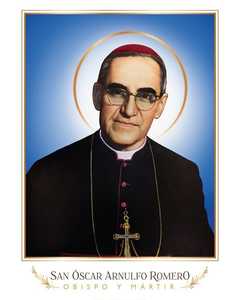 This is the official image of soon-to-be St. Oscar Arnulfo Romero. Msgr. Rafael Urrutia shared the official prayer card image during a meeting with San Salvador’s archbishop and others, and someone posted it to social media. (CNS photo/Twitter via @arzobispadoss)

When Father Bud was cautioned that his film would receive wider viewing if it had a happy ending rather than that of Romero’s brutal death, he countered: “The ending is, Romero lives on, in the people he served.”  And Jim McDermott recently noted that Romero, indeed,  lives on in the Salvadoran people but also in broader contexts: those ideas can be regularly heard  in the teachings of our present Holy Father, Pope Francis (America 10/3/2018).  Who do you suppose uttered words such as these?  “When we speak for the poor, please note that we do not take sides with one social class.  What we do is invite all social classes, rich and poor, without distinction, saying to everyone: ‘Let us take seriously the cause of the poor as though it were our own’.”   Or as on the day before his death, March 23, 1980, when Romero made an appeal to the men in the military: “Brothers, each one of you is one of us.  We are the same People.  The farmers and peasants that you kill are your own brothers and sisters.  When you hear the words of a man telling you to kill, think instead of the words of God, ‘Thou shalt not kill!’ No soldier is obliged to obey an order contrary to the Law of God. In His name and in the name of our tormented people who have suffered so much, and whose laments cry out to heaven: I implore you! I beg you! Stop the repression!”  Is the canonization of Archbishop Romero but one more signal as to where Pope Francis wishes to lead the church?

Do watch the film, Romero, and be grateful to those who continue to cry out in the desert: “NO to violence, YES to peace.” 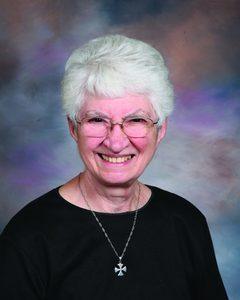 Sister Renee Domeier has been a Benedictine for 60+ years. She loves to read at least one poem a day and write whenever time and inspiration are given her. She said, “I am very grateful for the gift of life within and around me!”