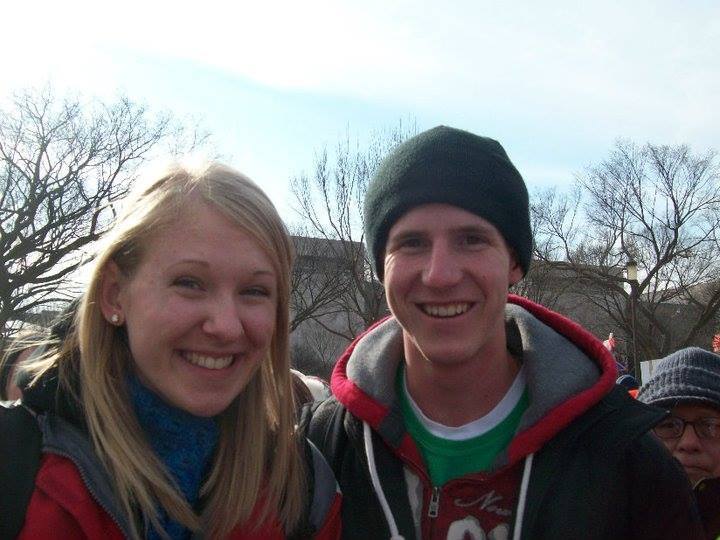 “No greater love is there than this: to lay down one’s life for a friend.”

This post is so hard for me to write because it has to do with one of my closest college friends, and his death this past Saturday. I met Ben (his real name is Brian Bergkamp, but he introduced himself to our friends as Ben so that’s what we always called him) my freshman year. Our group of friends was inseparable. The guys would go to daily night Mass with us girls and then come hang out in our dorm talking and laughing until the very last second of visitation hours, running out of the dorm before midnight hit.

When Ben decided to enter seminary at the end of freshman year, he wrote letters to our group of friends with all sorts of memories we had made together and hid them in bottles all over campus, leaving us clues to decode in order to find them. For the past several years, I’ve seen Facebook updates and talked to him here and there by letters, getting the updates on seminarian life and sharing my excitement with him for the day he’d be ordained a priest.

Then last Saturday, I got a text from one of my friends who grew up in the same town as Ben, telling us that Ben had gone kayaking that morning with a group of people on the Arkansas River and after hitting a rough patch of water, the kayaks all capsized. Ben and most of the others were able to get to shore, but one girl was being pulled under by the current, so Ben got back into his kayak, made it over to her, gave her his life jacket, and pushed her to shore before going under himself without the support of a life jacket. That’s the last time anyone saw him. He’s been missing ever since, with the rescue effort turning into a recovery effort to find his body after horribly long hours had passed.

I’m still not over the initial shock and grief of losing such an incredible friend and influence in my life. But I also feel like I’m just beginning to realize the ramifications of the way Ben both lived and died. He may not have made it to ordination day to become a priest, but by giving his life for another he lived out Jesus’ own priesthood of being both victim and priest, willingly giving Himself.

Right after finding out the news, I was scheduled to sing for Mass. Somehow, by the grace of God, I made it through and tried to hold myself together until it was over, but the Gospel hit me like a ton of bricks — the Good Samaritan.

The last conversation I ever had with Ben was on my birthday this past week; he told me he wouldn’t be spending the Fourth of July with his family because he’s spending the summer volunteering with other seminarians at the Lord’s Diner, a soup kitchen that feeds about 2,500 people a day, including those delivered by food trucks. He lived just as he died, putting another person’s life before his own, giving his life just as Jesus did.

In Adoration the day after Ben’s death, I read this in the first letter of John: “Little children, let us not love in word or speech but in deed and in truth.” How many times have I prayed and asked God to show me how to love, and then turned around and treated the people around me poorly, especially my family? Ben has taught me that it’s our actions that ultimately count, not our good intentions. It’s easy to love people theoretically, but when it comes down to it we need to put other people before ourselves in all circumstances. Ben is a true hero, not only because he died saving someone, but because he lived for others.

I know it’ll be a long road to healing for his family, brother seminarians, and all of us who were so blessed to know him. But there is such a peace knowing that he died serving God in such a beautifully concrete way. Another passage I read in Adoration has given me so much strength to face the hurt in my heart: “God Himself will be with them; he will wipe away every tear from their eyes, and death shall be no more, neither shall there be mourning nor crying nor pain any more, for the former things have passed away” (Rev. 21:3b-4).

“Who is my neighbor?” Everyone. Go and love the people around you, not just strangers but your family members, friends, and the people you see every day. Don’t just pass through life; give of yourself and live for others. As I learned from Ben’s witness, that’s what makes you truly alive.

Ben, thank you for giving your life. Please pray for us and help us to live in imitation of Jesus as you did.

Tricia and Nikki Walz are proud Minnesotans who were born and raised in the heart of St. Cloud with their younger sister Briana. Tricia uses her biochemistry degree to provide exceptional jokes which never fail to baffle Nikki, whose master’s degree in theology doesn’t seem to help her in this regard. When Tricia is not working at Medtronic she can be found at St. Peter’s and St. Paul’s volunteering with the youth, trying to regain her youthfulness by shooting hoops or taking full advantage of “Boneless Thursday” at Buffalo Wild Wings. Nikki, the younger of the two who uses that fact to remind Tricia that she will never be as old as her, recently embarked on a new adventure as the Faith Formation Director at St. Mary’s Cathedral and St. Augustine’s. Nikki can often be spotted in the adoration chapel, trying to imitate Taylor Swift on the guitar or keeping Cherry Berry in business with her love of chocolate. As cradle Catholics who discovered the treasures of the Church in their teenage years, they are extremely excited to share their experiences as they walk this crazy journey called life together!

Bless you for sharing your story of true friendship and insight into a life lived for Christ in your dear friend! Many have been praying for him, his family and brothers in seminary, and the whole community who loved and supported him. May the Lotd hold you close to His Most Sacred Heart.

Thank you; the prayers mean so much! It is continually amazing me how many people have heard Ben’s story and have been lifting him and his family & friends up in prayer. May the Lord hold you close as well!

I am so, so sorry to read about this.

As you well know, such souls are called to heaven so they can pray for us. God simply doesn’t make mistakes…

Thank you Jeff. It’s so true; I am completely confident that Ben is praying for us, which is such a beautiful consolation. God bless you!

Thank you so much for sharing your story about your friend Ben. I will always remember his story of giving his life for another. It will be a reminder of the Gospel story of the Good Samaritan. May God’s love surround you, his friends and family as you mourn the loss of your friend Ben. Know he is in heaven with God the Father and all the Saints looking down on all of you with a smile and remembering you in prayer.

Thank you Patricia; I hope his story continues to inspire people and point us all to Christ! His prayers and the encouragement of knowing He’s watching and loving us from Heaven brings so much peace. <3

Thank you for sharing. I am one of his many aunts as this helps me heal from the loss, to know how he is loved by so many & to learn about all the lives he has touched. May god bless you

Nancy, I am so sorry for your loss. I was very much hoping this would reach his family members to show you how much he is loved by so many, and I’m grateful to know that it was helpful on your road to healing. <3 He is truly a saint, and I know his prayers before God will be powerful. God bless you! You will be in my prayers.

Thank you for sharing this story of selfless love! I will share this with others at the parish where I minister, especially with our young adult Catholic group.

Many blessings to you!
Sister Katie

Thank you Sr. Katie! I’m glad to know you’re sharing this and spreading Ben’s story. My prayer is that it continues to spread in order to help us all live more Christ-like lives like he did! God bless you.

This. Story of Ben life is such an inspiration to everyone

My husband laid down his life trying to save a co-worker, which actually ended up them both dying. Even thogh it was many years ago, your letter helped me as a wife with our children left the hurt does’ go away, but your letter made me realize he is not gone, but living with theLord and still praying and taking care of us. Ben is still letting all realize how much Gods us and continually takes care of us.
Thank you for your insight. Prayers.

Patricia, thank you so much for sharing your story; it really touched my heart. I am so sorry about your husband. What a hero to give his life trying to save another <3 Praise God for the consolation that death is not really the end; it's just the beginning of eternal life! God bless you Patricia. You are in my prayers.

What a beautiful witness. We have been praying for your friend and his family over here in Nebraska. Im sure he was honored to read this piece from eternity.

Thank you Hannah. I hope so! It’s so amazing to see how many people from so many different places are praying for him and his family; thank you for your prayers from Nebraska! God bless you.

This is amazing. I just learnt something new from Ben. Love in our actions and not in words.

Thank you for sharing this story. Ben is sure resting in happiness and peace.