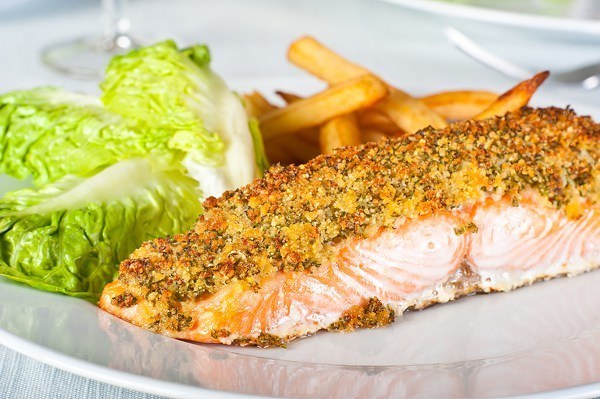 This Pecan Crusted Salmon is the second in a series of distinctive salmon recipes I’m sharing from “Food, Faith and Fellowship,” a blog I previously authored for The Visitor. It was originally posted on March 21, 2012.

Meanwhile, in a shallow bowl, combine the pecans, flour, brown sugar, seasoned salt and pepper. Coat fillets with pecan mixture, gently pressing into the fish. In a large skillet, brown the salmon in oil over medium-high heat. Transfer to a 15x10x1-inch baking pan coated with no-stick cooking spray. Bake at 400°F for 8 to 10 minutes until fish flakes easily with a fork.

A note from Amy: I usually don’t soak the fish in as much milk or for as long as the recipe calls for. I put it upside down (skin side up) in a glass pan, pour in a little milk, let it soak for about 10 minutes and then pour it off.

I’ve found that the pecan crust mixture makes a lot so I usually freeze half of it and it’s ready to go when I want to make the recipe again.

The first time I made it I browned the fish as directed but since then I’ve skipped that step and put it straight into the oven after I’ve dipped it in the crust mixture. I’ve also put it in a greased aluminum pan and placed it on the grill. It’s turns out great that way as well.

A note from Carol: Amy and I compared notes after I tried this recipe so I did things a little differently. I, too, felt that there was an abundance of the pecan mixture and so I peeled the skin off and covered both sides of the fish with it. (Next time I likely would make half the amount of this crust mixture.)

I followed the recipe and browned the fish — on both sides — since there was crust mixture on both. I made it in an ovenproof skillet and then put that pan directly in the oven rather than using another baking dish.