Time Flies When You’re Having Chemo: A Reflection on One Year of Cancer Treatment 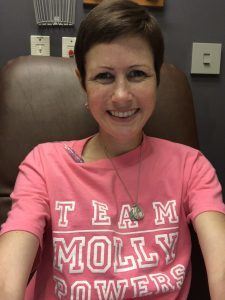 When June rolled around this year, it brought with it some heavy emotions.  Memories from last June came flooding back and I found myself reflecting on some pretty terrifying moments.  Certain dates in this cancer journey will always stop me in my tracks.  Like June 8 for example.  June 8 is emblazoned in my mind as the day I was diagnosed with cancer. But for all the darkness and fear that last June brought, it had some rays of light as well.  And as much as I would love to say that this summer has been nothing but light and hope, I can’t.  However, the tears of sadness and fear have mostly been replaced with tears of joy and hope.  We attended a college reunion, which included the opportunity to reconnect with old friends and meet their new babies!  We celebrated the baptism of our godson on the feast of the nativity of John the Baptist.  There were trips to the lake and runs that were literally bursting with color (I’m talking about you CCS color run!).  Cook-outs with friends filled up our bellies and our hearts.  And before I knew it, July was here.

Last year the July calendar was filled with things like my first chemotherapy infusion and myriad medical appointments.  However, this July happily marks the end of my cancer treatments.  Earlier today I sat in a room at the Coborn Cancer Center for my final biotherapy infusion.  After 18 rounds of that stuff, I can’t believe it’s over.  If I’m honest, I never really minded the infusions.  Don’t get me wrong, when chemotherapies were a part of the infusion cocktail, I knew I’d have hell to pay at the end of the week.  But the actual infusion?  It kind of felt more like a spa day than a day of toxins dripping slowly into my body.  Infusion days meant one of two things:  Either I got to sit in a room with a good friend and no sippy cups to refill or I got to sit in a room by myself to pray, read, and write with no sippy cups to refill.  I guess that’s what it really comes down to.  There were no sippy cups to refill at the cancer center.  As a mom of two littles, there are always needs to be tended.  I love tending to those needs but letting someone else do it for me once every three weeks certainly allowed me to relax a little…and hopefully grow in holiness.  After all, that’s what this life is about.

Molly, her husband, Kevin, and her godson.

This year has been arduous.  Our little family has carried some crosses for sure!  But the cross is a part of the Christian life.  In fact, we are told to embrace it.  We have a God who also carried a cross.  He gets it.  At Mass this week, we sang that lovely hymn based on the famous prayer attributed to St. Francis of Assisi (although not likely penned by him in reality).  I found myself reflecting on the final line of the prayer which reads, “it is in dying that we are born to eternal life.”  Although the daily crosses that we bear don’t usually kill us, they give us the chance to die to self.  These little deaths bring about little rebirths in which we become better humans.  Every cross brings with it the opportunity to grow in virtue and to grow closer to Christ.

It hit me as I was unpacking my infusion bag that it was the last time I would do that.  I think that is when it really sank in that my treatment is complete.  I’ve brought the same bag to the cancer center every three weeks for the past year.  I got the bag a year ago as a gift and its sole use has been toting my books, journals, computer, candy, and blankets to the cancer center.  The nurses would laugh at me as I would lug that bag into my infusion room, joking that it weighed as much as me.  In many ways that bag was an instrument in my spiritual growth.  It carried the crucifix that stood on my table at each infusion and the devotionals that spoke God’s Word into the ear of my heart.  I look forward to giving it new uses now, but I’m grateful for its role in this journey.

As I reflect on the past year, which has been the hardest of my life, I thank God for both the crosses and the spiritual tools that have helped me grow.  Despite how difficult this year has been, there is no guarantee that it will the toughest one I face in my life.  I pray that I have the grace to approach each future cross with virtue.

Molly Powers is not a native Minnesota girl. Rather, she hails from Atlanta, GA and lived in several different states and countries before she landed in Minnesota in 2017. She is a wife and mother of two.